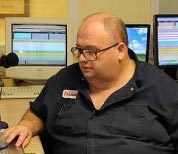 [May 2011] The C. Crane Company has a reputation of designing and selling radios and peripherals of high quality and modest prices. Kevin Raper takes a look at the CCRadio-EP.

It was with eager anticipation that I looked forward to taking the CCRadio-EP on a test drive. This portable radio has really created quite a storm in the DX Community, and I was happy for the opportunity to put it through its paces.

The CCRadio-EP looks like – and at an MSRP of $69.95 is priced like – C. Crane’s answer to the discontinued GE Superadio series. So that is what I used as a basis for comparison.

Like the Superadio III, the CCRadio-EP has old fashioned Slide-Rule tuning, separate Bass and Treble controls, and a Bandwidth Control. It also has jacks for External AM and FM antennas.

Additional features, not present on the GE, include a dial light, a line input, and fine-tuning on the built-in twin-coil ferrite AM antenna. 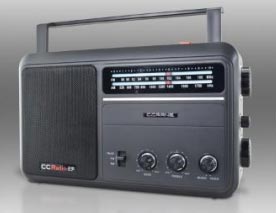 As soon as it came in, I popped some new Dcell alkalines in it and fired it up. The CCRadioEP made a great first impression for me.

The radio has much less internal noise and is more sensitive than the GE radio. The AM performance is amazing, picking up radio stations perfectly clear that even the GE Superadio II could just barely bring in. The improvement over the performance of my original CCRadio was immediately evident.

The high degree of sensitivity was proven when I fed the radio with my Alpha-Delta DX-SWL Sloper and found it overloaded the front end from one end of the dial to the other.

My quick solution was to just go back to the internal loop antenna and the radio was happy again but I really wish the EP had an RF Gain control for overload protection.

And a Strong FM, Too

While I am not that much of an FM listener anymore, the FM section is a real killer.

When I connected the CCRadio-Ep to my Channel Master Stereo-Probe 9, it was every bit as good as my Magnum Dynalab FT-101 as far as sensitivity and selectivity goes. And, on FM, that is as good as it gets!

The only other portable I have seen with this kind of FM performance is the Grundig G8.

Overall the sonic quality on the CCRadio-EP turns out to be a bit different than my GE Superadio III, as the CCRadio-EP is tuned a bit more for the human voice, while the GE seemed tailored slightly more for music with a more “punchy” bass.

I really like the ability to fine-tune the twin ferrite loop. The benefit from this feature is clearly evident when DXing the upper end of the band in the daytime. It makes a big difference.

For example, I am located in an RF minima of WAGL – 69 Miles from the 1560 kHz transmitter. The CCRadio-EP is the only radio I have that will get the signal perfectly clear just by turning the AM “fine-tune” to the 6 o’clock position.

Among the other features, I really like is the dial light switch. I hate dial lights that only stay on for a few seconds. So, I like the fact this one is push on then push again for off – staying on just as long as I desire. It also lights up the entire dial evenly so there are no dark spots.

My first and only real gripe with my EP was the AC/DC power supply. The CCRadio-EP uses an external wall-wart power supply unlike the line cord and internal power supply in the GE. The one that came with the radio made a loud hiss on both AM and FM, and desensed the FM so it would only pick up the strongest locals.

In response to my queries, C. Crane acknowledged the problem and sent me another unit with a power supply that did not hiss nor hum nor desense the radio.

So that got me thinking and I compared my EP with those from several friends. One radio was as good as mine on AM and maybe even better on FM, but the other two radios were not quite as sensitive on FM as mine. One of those was not as good on AM as mine.

When asked about it, the folks at C. Crane noted that they were aware of such variations and already were in the process of making improvements to the manufacturing process.

Fortunately, I could pack up the bad power supply with the out of alignment radio and send them back, keeping the good power supply and my original radio. Now I am very happy.

Because many stations are out in the boonies 3 and have a hard time getting their LP-1 or LP-2 stations, a sensitive, selective radio like the CCRadio-EP might be considered as a source-receiver for your EAS Receiver.

Well, your success will depend upon whether or not your EAS is on the same site as your transmitter. If so, it likely will not work. As with most highly sensitive radios, the EP does not like high RF fields. However, by using the external antenna input and your own attenuator, you should be able to make it work.

Overall, I like the radio. It is the only radio I have that will pick up all three of my stations at my home in Laurens, SC. And, it is now my Primary DX-Getter when I have time to play.

I especially like the fact that the CCRadio-EP is so easy to use. There is nothing to program, just turn it on and away you go. Interestingly, indeed this was one of the main design criteria, according to C. Crane, along with exceptional reception.

This simplicity is a great benefit for another reason. One of the things we do is to put radios in area nursing homes so the patients can listen to one of our stations. The EP is one of the very few radios that will pull in AM well enough to use like this – and still, be simple to operate.

Even loaded with four D-cell batteries, it weighs only 4.3 pounds, so it is easy for older people to move around, too.

All in all, aside from the occasional misaligned unit, the CCRadio-EP is a good choice for a sensitive, selective portable radio for professionals as well as elderly users.