In Disaster Time, How Will You Fare?

[July 2016] When the storm hits it is already past time to get ready. Now you get to see if your preparations will carry you through – or leave your station as a silent hole on the dial.

Patrick Roberts had a brush with a tornado. Having a plan kept him on the air.

In late May 2013, several tornadoes hit the Oklahoma City area, especially one that tore a two-mile wide path some 20 miles long in the city of Norman. As many watched on television, some 13,000 homes and businesses were destroyed in a matter of minutes, along with at least one school and medical center.

In much of the area, power was lost, cell phone towers were knocked down or went dead, cable was out, and the Internet were gone. Two directional AM stations were nearly hit, one being missed by the full force of the tornado by only a couple of hundred feet.

With all that damage, broadcast was the only way to communicate to those in the disaster zone. And the area TV and radio stations stepped up. Fortunately, many of them hand disaster plans in place – and only one was reported to have gone dark when the generator failed.

As the tornado drove its way through Norman, it came within two miles of KGOU’s main transmitter, taking down power at the site for a couple of hours at the height of the crisis.

A 6 kW Class A FM station on 106.3, KGOU has been serving Norman and the metro area for 30 years with NPR programming, local news, and information from studios on the Norman Campus of Oklahoma University.

Being in the so-called “tornado alley,” KGOU Chief Engineer Patrick Roberts has planned for dealing with weather issues. In fact, he has Plans A, B, and C to keep the programming flowing. 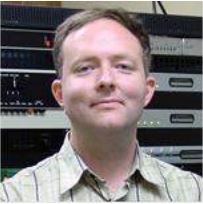 Roberts says it is important for local stations to be able to say on the air in an emergency: “As you know, when it matters, that’s a huge lifeline, especially in a small town.”

Of course, as he says, “What most of us have learned is that utilities can – and do – fail in storms.”

To deal with that, KGOU installed an auxiliary transmitter at the original site on campus – four or five miles from where the tornado hit – where the power has been pretty stable, and generators are available, too.

With the separate transmission site, Roberts could switch to his campus site and turn his attention to keeping the information flow going on the air.

He felt fortunate that studio power never went out on campus and that his UPS system was able to “smooth out” some of the power bumps that did occur. 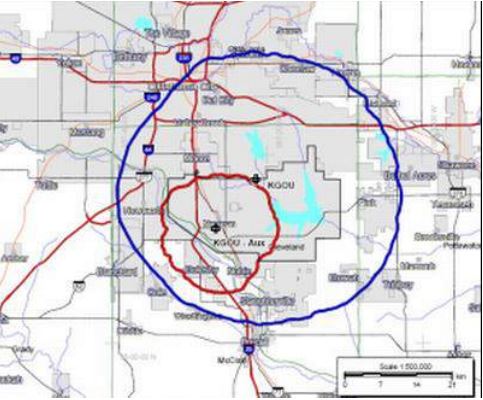 The auxiliary site is capable of covering a significant portion of KGOU’s service area, and virtually 100% of its City of License, Norman.

Obviously, NPR programming would not be able to provide the local details needed. And as a small local station, the KGOU news staff would be stretched beyond their capability.

Time for Plan B.

KGOU immediately switched to an audio feed from a local TV station “partner,” KOCO-TV Channel 5, which was received over-the-air from a rooftop antenna and web stream.

Roberts says, “I think radio in Oklahoma, because of the repeated weather issues, has formed a very strong “partnership” with TV news. “That takes the burden off radio to gather news. Our job around here is making sure we switch to TV audio when appropriate and keep the signals running the best we possibly can.”

He added: “It would be nice to think that radio can stand on its own in gathering, but for the most part that simply isn’t the most effective option anymore. TV stations love the fact that, not only they are saving lives, but they are providing a way to be heard when power fails or people are out of their homes, on the road. It’s a crutch, but an extremely effective one.”

Another benefit of “splitting the burden” is that with radio providing the reach, especially into places where there is no power to run TVs, the TV stations deal with access issues.

Roberts says “the TV guys that were down there were battling things like bad cellular service, microwave congestion issues for their terrestrial links, fuel delivery, and – most importantly – a lack of access caused by some of the folks there to guard the area.

“I’ve heard from several of the TV engineers that they aren’t easily allowed to get even fuel into the designated media area.”

This is a problem that seems to crop up in many areas. For example, during the 2005 Hurricane Katrina disaster, there were several reports of stations dropping off the air as local sheriff’s confiscated fuel trucks that were being sent down.

Roberts notes that in the Oklahoma City area, there is less of this sort of hassle, at least among the local folks: “The local EMs, especially in Moore and Norman are very, very good. The Moore guy actually sets the standard.

“Local media, for the most part, [also] has a decent relationship with the police, so under normal conditions we generally have no issues getting into a site with proper ID.”

Learning From Each Event

No matter what preparations are made, adjustments always have to be made on the fly.

It is a common situation at emergency sites, as Roberts says, “Law enforcement is over-whelmed, so they have put National Guard guys in place that cannot make proper decisions on who to let in and who not to let in. Some out-of-town media have had their direct arguments with them about getting into restricted areas, so that also complicates things.”

He hopes that some initiatives to provide broadcasters with “First Responder” credentials may help in the future: “We as tech folks have to be in the same category as the electric guys, the street guys, the cable guys, the phone guys, and the cell tech guys. We all need to be able to get in and fix the support structure. We don’t have time to news gather nor the desire to news gather under disaster conditions.”

Even routine EAS testing on the state level is difficult except during the day, because state offices are not staffed 24/7. This means there is a lot of work to do to improve communication for future storm events.

In these, and in other places, broadcast associations and local managers need to be proactive in working with state and local authorities to get proper credentials for the station engineers – as well as contemporary information during disasters, not at some press conference the next day.

Roberts is happy to report that during the storm, “We were lucky enough to not lose internet, but our cable did die. Considering we re-broadcast TV audio, that’s huge.

“Plan A, B, C, etc. is appropriate for getting that lifeline TV audio. I’ll be adding more at my contract stations so they have other options based on what I experienced.”

KGOU was able to stay up and running even in the face of an EF5 tornado in the area. It is an example for all stations, and an encouragement to make plans to alternate audio feeds as well as auxiliary transmission sites.

After all, when is a radio station more valuable to the listeners and community than during a weather emergency?