[July 2016] What would you do if you could not reach your transmitter site for an extended period of time? Forest fires can and do isolate mountain sites, sometimes for weeks.

There are many things that can knock a station off the air, no matter how careful the engineers are in building and maintaining a site.

For example, a direct lightning hit will often create a major problem. A regional blackout can also leave a station without generator or battery backup deal in the water. Flooding can make access impossible with or without a boat for days. 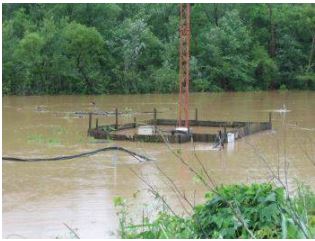 Now what do you do?

In 2009, most of the FM and TVs stations in Los Angeles had to deal with the effects of a major fire.

As the fire grew around Mt. Wilson, where their main transmitters are located, the Forest Service (USFS) closed the highway to the site. For days on end, the broadcasters had two choices: (1) hope that their generators and/or auxiliary transmitters held up or (2) that the one or two engineers left on the site might look in on their transmitters.

A few months later, a heavy rain created a dangerous mud slide situation. The USFS had to shut down the access road to Mt. Bigelow again. More days before normal access to the site might be restored.

Of course, during the fires, Murphy had his say, and some generators failed for one reason or another – and the stations went dark.

In an example of California bureaucracy during a disaster, the USFS itself was cited by air pollution officials after its generator ran for more than eight hours.

A few engineers tried to access the site, outfitted with fire-resistant clothes. Some actually got there, but others were turned away.

As the fires continued, a couple of the stations lost their audio feed – and went dark.

During local disasters like floods or fires, often a few stations will “fall back” to their Internet streaming.

On the other hand, any radio station whose carrier is lost is in a bad place – the bulk of its listeners are lost within the first minutes. Worse, it sends a bad message to those listeners: they are not a reliable source when people really need news and information.

Unfortunately for most broadcast stations, even auxiliary sites ultimately have at least one single point of failure: the antenna or the tower itself.

So what do you do? Two words: Plan ahead!

Your station may not be in an area where fires or floods are major issues. You may not even have to worry about earthquakes. Nevertheless, a strong look at how you get your programs on the air – and how you will get to the transmitter site in an emergency – deserves attention … and a plan.

Plan B: An Auxiliary Site

Fortunately for most of the LA stations, their engineering departments had either foreseen the need or scrambled and got some auxiliary sites put together so they could keep operating even if they lost the Mt. Wilson site.

The ability to bypass an entire transmission site is attractive, whether the main site is subject to loss by weather, fire, power, earthquake, or any other cause.

Such sites can also be used as an off-site backup of the station’s automation or audio chain.

One wake-up call was the increasing reliance on an overloaded power feed (the electric company did build a second line, but the forest fire burned it). The loss of that line highlighted the need to deal with other potential equipment failures, such as loss of a Studio-Transmitter link (STL), whether by RF or hardware.

The auxiliary site can also overcome potential hassles with the “air pollution police” – even though one might have hoped they would be a bit more flexible during a temporary situation than was exhibited in Los Angeles.

In many places, stations are working harder than ever to ensure multiple paths are available to get their programming to the transmitters, which, increasingly, are at multiple sites.

It is interesting and instructive to count the number of possible audio paths some stations have installed.

For example, one major market station has three different RF STLs (both analog and digital), a T-1 (or better) line, an Internet connect, an RPU receiver, a telephone line with autocoupler, and a prepared input to accept a laptop with the station’s programming schedule and spots ready to go on from anywhere.

Plan B, Part 3:
Cooperation in the Market

Another useful auxiliary site solution involves cooperation with other stations in the market and their companies.

Two (or more) stations can locate auxiliary transmitters at each other’s site, an arrangement that could save a lot in ongoing site rental costs. They can arrange for studio space.

For example, during Hurricane Katrina, Clear Channel and Entercom shared studio facilities in Baton Rouge. While this kind of arrangement is not something you might want to do short of an extreme emergency, it is a way to keep the programming flowing from somewhere, no matter what is going on.

It seems pretty obvious that, in an emergency situation, just running the “hits” from an automation system is probably going to be perceived poorly by the listeners. Yet, many times, that is all the station can do, as they have no plan in place to get their people live on the air.

On the other hand, having a plan in place that is understood by the staff will allow a rapid response to anything that threatens to interrupt the station program flow.

What has worked for you? Let us know; share your knowledge and experience. You can use the “contact” page on the BDR site.