That FCC Fine is How Much?

[July 2014] When the folks from the Enforcement Bureau show up at the door, it sure can be hard on the heart and nerves. The reason is easy to explain: whether it is a full technical inspection or one of those “Public File/EAS/Tower fence and light visits” from the “Enforcement Specialists,” the result can be a major cost. Avoiding that situation seems like a good course of action.

Unfortunately, these days an appearance by FCC personnel is normally not a good sign.

Given their reduced budgets, field agents are generally sent out to investigate specific complaints or violations they might observe while dealing with some other matter. Hence their appearance can start the stomach acids churning.

The reason for that is the potential for receiving a Notice of Apparent Liability (NOL), which can take a great deal of time and money to resolve. Another is that some EB personnel seem anxious to advance their career by generating more fines.

On the other hand, if yours is a quality operation, while some tension may accompany the appearance of an agent, the anxiety level will be much lower.

Indeed, if you have kept your Public File and other records up to date, run the EAS tests as required, and have the transmitter site operating well within the Rules, there generally is no need to panic.

It is as simple as that.

There is no secret to what is included in these inspections. The FCC even provides the whole inspection program up front for you in the FCC Self-Inspection Checklist. All you have to do is follow the checklist point by point and have no fear of any inspection, whether casual or detailed. The inspectors follow the same points.

In most cases, a proven way to keep the inspectors away in the first place is to participate in the Alternate Broadcast Inspection Program (ABIP) run through your local broadcast association.

Many of the inspectors in the program have a lot of experience and can quickly determine of your facility meets the requirements of the FCC. And state broadcast associations do promote a popular feature of the ABIP: an agreement with the FCC that a station which has passed the voluntary inspection is issued a certificate of compliance that reduces official inspections for up to three years.

When an FCC agent sees the certificate posted in a station lobby, they will often acknowledge it to the receptionist, turn around, and leave for somewhere else. That is clear proof that the modest cost of an ABIP inspection is without doubt a good investment.

On the other hand, no matter what your state broadcast association says, if there is reason to suspect your station is out of compliance in any way – and that includes accusations from former 2 employees – the field agent may inspect you station at any time – even the week after an ABIP inspection.

At Section 1.80 of the FCC Rules, you will find the base amounts of fines that can be issued. A small section is copied here: 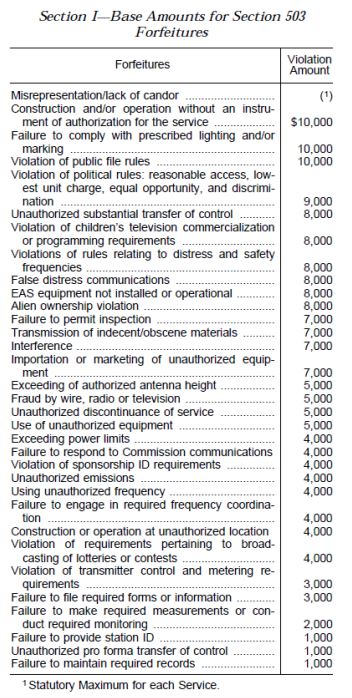 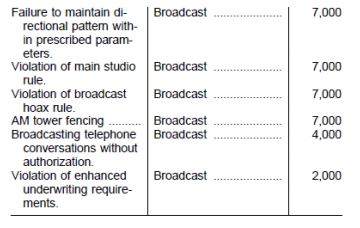 In addition to these amounts, which can be “per violation, per day” up to the FCC maximum, the Rules allow an “Upward Adjustment” of the forfeiture. Section II of Part 1.80 of the Commission Rules permits an increased fine if the Commission finds:

(5) Prior violations of any FCC requirements.

The FCC has occasionally exercised that section, most recently in imposing $1.9 million dollars of fines on Disney, Viacom, and NBC Universal for using EAS tones in anything but a genuine EAS activation.

Perhaps you have been in a situation where, despite your recommendations, the manager just recoils at the cost of repainting a tower, for example, or fixing the fence around it.

A little warning talk with the manager also helped, by spelling out the potential liability if needed repairs or adjustments were not made in a timely manner.

No Real Need to Panic

It is rare that Notices of Liability (NOL) are issued for the statutory maximums, but even the common fines issued can hit like a cold shower on a cold day.

OK, now that you have taken your blood pressure and anti-anxiety medicines, let us quickly point out that it is not common for the FCC to levy such fines – except in some sort of major issue. Nevertheless, the typical fines imposed are nothing to sneeze about either, especially since they can be for each day the violation continues.

And, on top of the fine comes the costs of lost engineering time and legal representation. In many cases, stations find that it costs as much, or more, for the communications attorney than the fine itself. This gives any company sound reason to avoid Rule violations in the first place.

Under the old system of Radiotelephone Licenses, the engineer himself was as liable for Rules infractions as the station owner, at least in principle. In fact, he could lose his license.

However, good documentation often has saved engineers from problems with the FCC.

For both, it might be very helpful to review Jim Pollock’s recommendations on how to avoid getting caught in the FCC Cash Machine. It is found here.

The More You Save

The more you save on avoiding legal fees and fines, the more your facility can spend on routine maintenance and equipment upgrades, which not only keep you legal but usually make your signal cleaner and sometimes stronger. – The BDR