Self Defense From the FCC Fine Machine

[January 2013] As we start a new year – and are still in the middle of the License Renewal cycle – this is an apropos time to review how your facilities are doing in terms of complying with the FCC Authorizations.

As a consulting engineer, I have become very interested in a very non-technical aspect of the broadcast business – the fines that the FCC assesses against stations for various infractions.

Paying the Engineer – Or the FCC

The matter drew my attention when a “pro-se” client was so bogged down in FCC fines, that he could not pay his consulting invoices. Like it or not, we became adversely affected by the fines through collateral osmosis.

With due respect, the fine victims seem to fall into two categories:

The former suffer from not having anyone watching their back regarding compliance with the Rules and Regulations. The latter take the view that it is all a matter of probability, and they look at it simply as a risk which can be amortized over the years (Oh! you riverboat gambler, you).

With respect to those who are unaware, the consultants and/or the local engineer often are viewed as the bad guys – especially when the licensee feels they should have seen the problems and did not make the licensee clearly aware of them.

On the other hand, the risky path works as long as the FCC does not pay a visit to the station. However, I have noticed that attitude abruptly changes when station management is faced with a stiff five-figure fine.

Here is one of the best reasons why avoiding the NOVs and NALs (explain abbreviations) is so important: In order to recoup each dollar lost to forfeitures takes as much as ten dollars in sales.

How to Avoid Fines

The first thing to do is identify the areas of vulnerability and make sure that everything is in order. In some states, an Alternative Broadcast 2 Inspection Program (ABIP) is in place to help stations by arranging an inspection that is not reported to the FCC, unless the station passes – in which case the station is normally not inspected by the FCC over the next three years.

The main areas where stations often find themselves facing nasty monetary assessments are:

This is not an exhaustive list. However, the notices of fines assessed by the FCC each year indicate there is a lot of emphasis on these key points. For a more comprehensive checklist in conducting station inspections, it is useful to download and use the booklet available at: http://transition.fcc.gov/eb/bc-chklsts/

Following this checklist and correcting any problems will go a long way to preventing problems with the FCC. Nevertheless, even with the checklist, many questions may remain. So, let us look at a few of the areas inspectors upon which inspectors will focus.

Public File citations seem to be the most common. Violations begin at $10,000, and these fines can get really nasty if the FCC Inspector deems the violation as due to gross negligence. Ignorance of the Rules offers no protection or mitigation.

You can invest a small amount of time and printing by reading the Public Inspection File series here on the BDR. The articles were written to help understand the Public Inspection File and its parts. Some of the articles come directly from inspectors who have been part of the ABIP. Others come from interviews with a number of inspectors and FCC personnel.

One more thing: make sure your Public File contains the brochure entitled The Public and Broadcasting. The current edition was most recently updated in July 2008. This brochure has to be made available to anyone who wants to see it – or who requests a copy. (You can charge duplication costs if they want a “hard copy.”) If you do not have the July 2008 revision in your files, get it now at (the link to the pdf is bad): http://transition.fcc.gov/mb/audio/newsite/docs/ public_and_broadcasting.html

Potential liabilities do not stop just at the Public Inspection File. The scope of FCC compliance for broadcasters is not confined to Part 73. FCC Parts 1, 2, 11, 17, and 74 (among others) have to be considered to assure compliance and keeping your checkbook balance intact.

Indeed, after Public File violations, EAS and tower lighting violations are among the most prevalent assessed against stations. And in recent years, political forces have made profanity a real hot-button issue, and the source of fines. Of course, whether or not the fines stick, the legal costs may be as much or more than the fine itself.

The FCC Fine Schedule is located in FCC Part 1.80. Just looking at the list of “gotchas” and penalties is a wake-up call in itself. A table of infractions and relevant reference to FCC Regulations appears at the end of this article. If you find yourself with questions – or have been cited – please retain an FCC Attorney for legal advice.

The FCC has been working on its web site to improve its delivery of information.

While there are some glitches, a lot of the material that used take a lot of searching is sometimes now found a bit more easily.

However, the link you need takes you away from the FCC to the GPO, the Government 3 Printing Office site. There is where the CFR titles will be found, labeled “e-CFR.”

As this is written, the site says the files are updated to January 3, 2013.

Nevertheless, it is always advisable to take a little extra time to make sure any critical rule you are seeking is the most recent version. There is a delay between when the FCC makes changes and when the GPO published it.

For your information, the index of CFR47 titles at the GPO are found here – a click on this link will save you a lot of typing time.

At this writing, the current version on the GPO site is dated January 2, 2013. Any time you use the site to download the Rules, be sure to check the date shown.

The ultimate reward for FCC compliance is the absence of penalty. There is nothing that you can do about an FCC inspection. If is destined to happen, it will occur whether you take a proactive interest or not.

Of course, it is station management’s responsibility to maintain compliance and foster it by getting the staff involved. Paying attention, routine internal inspections, and taking advantage of the ABIP all add up to a well-run operation and less money paid out in fines.

Finally, please let me repeat this important point: This article is intended to raise awareness and it is not meant to be legal advice. An FCC Attorney can dispense the appropriate legal advice.

James W. Pollock, P.E. is a consulting engineer based in Mt Laurel, New Jersey. He can be contacted at njpollock@comcast.net See the following four pages for a list of FCC fines.

See the following four pages for a list of FCC fines. 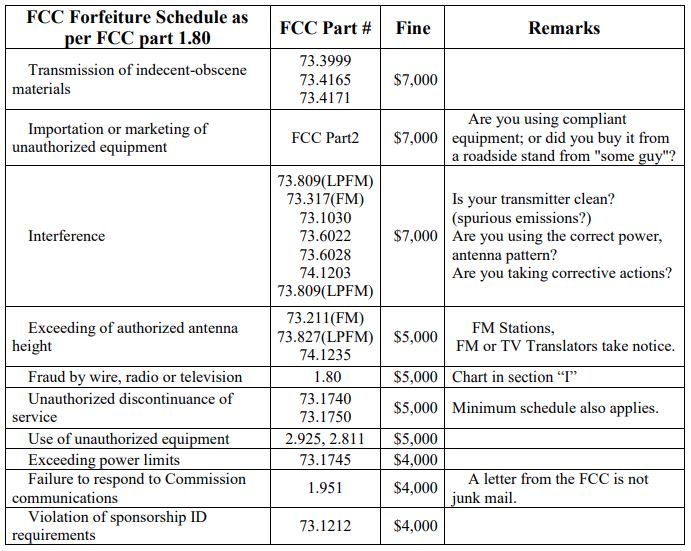 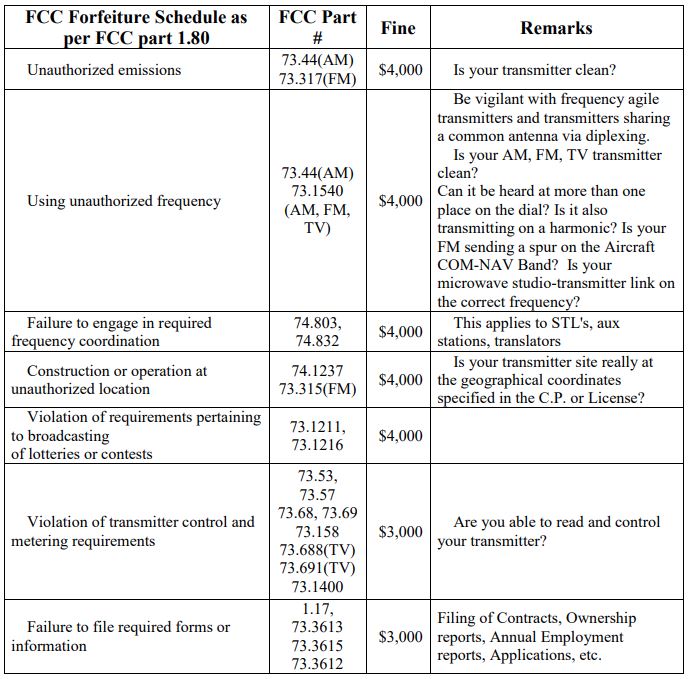 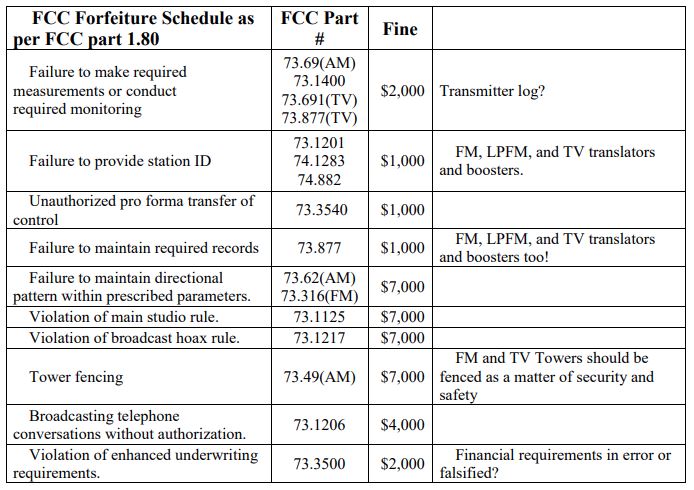