[December 2012] Here is another in a series of reports by our radio critic Kevin Raper on the radios he has checked out.

When I first heard of the Marathon Emergency Task Force Radio (ETFR) my first reaction was “[yawn] Another junk radio labeled as a ‘Survival Radio’ and priced accordingly” – as about 90% of all Survival Radios turn out to be.

But then I heard a bit more about this radio that got my interest up.

The ETRF (aka the GP-4L) was designed for Canadian Forces to be a cold weather resistant radio that will work in all conditions that are found worldwide. It is also the smallest World Band (Shortwave) Radio on the market.

County Comm, the distributor, mostly just sells to government agencies – but it does allow the public to purchase their over-stock and items that are surplus to their needs.

Hmmm: A military spec radio sold by a government distributor. I thought perhaps this radio was better than the average Survival Radio after all. So I ordered myself a copy!

I got mine from the source:

Later, I learned just what a bargain that is.

When I got my Radio I noticed it came in a weather resistant blister pack and came with an Owner’s Manual in Several Languages and some pretty good ear buds. 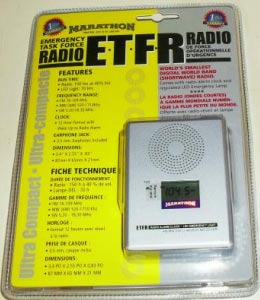 I noticed something was missing, but I really liked it. There was no “Made in China” Sticker! Yep! It is made in Canada for the Canadian Military.

In short, I am quite happy. I love the concept of a shirt pocket-sized shortwave radio. That is why I pestered every Radio Shack around and tried so hard to get a Mini 400 that worked.

I popped a couple of AA batteries in the ETFR, and it works! Unlike the dozens of Grundig Mini 400s I have tried, every function on this radio works exactly as it should according to the Owner’s Manual.

This radio is everything I wanted from the Mini 400 and more. It is cheaper, smaller and most of all, it works!

On my high RF field test at WCKI it worked on AM and FM, getting my LP1 and LP2 stations with no problem, even next to a Class C FM. In fact, it even picked up some of the stronger shortwave signals! It just does not seem to be bothered by overload.

This radio actually sounds better than I expected with the 40mm speaker, but had even greater audio with the included ear buds. By the way, while the speaker is mono the headphone jack is wired for stereo, so it sounds great on any Walkman-type headphones.

The ETFR has a run time of 150 hours on a new set of batteries, or the light will shine at full brightness for 70 hours. There is a jack for an AC adaptor, but one is not included. I found I really do not need it, but a trip to the local Radio Shack would get you an AC adaptor if you want one.

It also has a built-in alarm clock.

Picking a Nit or Two

While this radio is just what I have been looking for, a great shirt pocket-sized shortwave radio, this radio is not perfect, and has some design flaws that I hope are corrected in a future model.

For example, although it fits very nicely in the shirt pocket, the radio lacks a wrist strap for those users without a pocket. 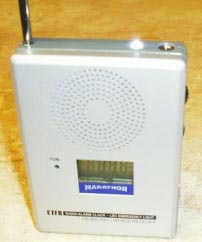 More importantly, the side-mounted tuning knobs are not recessed, so when you slip it into your pocket, it is easy to knock the tuning off of the station to which you are listening.

In the end, I used some electrical tape to solve that problem.

You can also see that the labels for the switches and knobs are on the back of the radio, making them somewhat awkward during use. I think they should be printed on the front of the radio like everyone else. 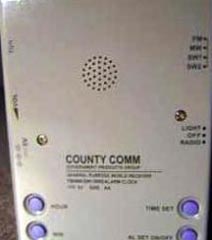 Finally, I really wish the radio had a dial light. In fact, I would rather have a dial light than the flashlight, especially since the way the power switch is made, you cannot use the radio and the light at the same time.

To sum up: $28 gets you a really nicely built radio that fits in your pocket.

And you do not have to be in the Canadian Military to get one!