Seeing the Light While Installing Wires

[December 2009] Going into a studio you have never been in before can resemble taking a walk into deepest, darkest Africa. The resemblance becomes uncanny when you find yourself inspecting equipment that is jammed back against walls with no human-accessible access space – and what cabinet rack space does exist is crammed with a tangled maze of cables.

Such was a recent experience I had. The mission: To install some more cables in an already tight spot.

Over the years, most studios find themselves dealing with “Mission Creep” – the need to add more and more functions and audio sources as formats change and/or mutate. As time goes by, the available room for additional cable sort of disappears. 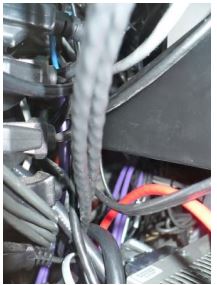 As you can see, between the electrical outlets, wires, and equipment itself, not much room was left for maneuvering.

During Day One, another person was there to help. He was on one side of the cabinetry, pushing the wire through, as I first looked, then stuck my hand in the maze to try to feel the new cable as it snaked its way through. Aside from my leaving some DNA evidence on a sharp metal edge hidden inside the cabinet, having that second person somewhat eased the challenge of threading cables through the maze.

More of a Challenge

I was not so lucky on Day Two. This time I was alone.

Lying on my side and peering through an access panel, I was faced with a wall of wiring so dense that I could not see any light coming through an access hole I knew was there on the other side. As I tried to thread a KVM connection cable through, I almost got my hand stuck. No kidding!

The next step was going to require care. I was reluctant to poke a fish tape though for fear of puncturing something vital or pulling apart one of several untapped USB extender cables I suspected were buried deep within.

After some thought, the solution appeared: I attached my trusty small flashlight to the KVM cable with electrical tape and gently pushed it in through the maze as far as I could from the far side.

When I again assumed my position on the floor and looked inside, I could not only clearly see the beam of the lit flashlight, but as a bonus, I could also see what I might pull loose. It was then a simple matter to gently pry the intervening cables aside to make way for a clear pull for the new cable. 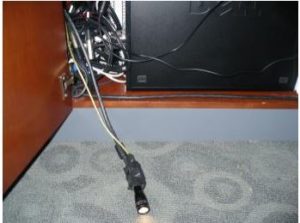 You might say I truly saw the light at the end of the tunnel.

Richard Rudman is a long time engineer in the Los Angeles market, and a Past President of the SBE.
Contact him at rar01@earthlink.net