Radio … My Love, My Passion: A book by Marlin Taylor

[August 2018] A lot of broadcasters have written biographies or histories of their experiences in the industry. Marlin Taylor’s book is among the more interesting because he stops and analyzes what he did, what worked, and why – and covers several major changes in radio.

For anyone who has worked in the broadcast industry for over 20 years, one thing is evident: this is not the industry we originally signed up for.

The current transition began back in the mid-tolate 90’s. While many stations still had a live air staff, turntables, CD players, reel-to-reel, and tape cartridge machines for their programming, the move to satellite delivered programming was well underway, along with computer automation.

True, there were stations that fought hard to become and stay local, live and relevant to their listeners’ lives. But, in the rush to consolidation and automation, many would say that the very “soul” of broadcasting was lost.

That is just one of the reasons Marlin Taylor’s book “RADIO… My Love, My Passion” will resonate with anyone who came up into an industry that was as vibrant, competitive, and innovative as broadcasting was in the 60’s.

Taylor, you will learn – if you did not know – is one of major programmers of the 1960’s onward that you might not have heard of his having designed three channels for what would become XM/Sirius radio. But, to be sure, he started at the bottom.

Consider Taylor’s job in Trenton, NJ. After being attracted to radio in his youth, he made his way to the local daytimer one Saturday and found the door open. He met and “clicked” with the announcer there, volunteering his time to answer phones, etc, while they talked. In time, he was hired to be a board operator – if he provided gear for a remote broadcast.

From Greenland to Washington

Inducted into the Army, Taylor exploited his experience and volunteered to operate the radio station at Thule AFB in Northern Greenland. He then began looking for a civilian job when he got out.

There was a time when FM radio was really the province of owners and engineers that managed to pull together a program and on–air signal with ingenuity and workarounds.

And Taylor found himself there, at Washington DC’s first FM Stereo station. .

WHFS was a new station, put up by a couple of hard workers, Bob Carpenter and Bill Tynan.

As Taylor reports: “Bob began his endeavor with not much more than a pile of junk radio equipment and a box of electronic parts.”

Indeed, the main transmitter was built from parts of one of Major Armstrong’s units from the 1930s, the exciter was an RCA model originally designed for operation in the 40 MHz band, the stereo generator was from H.H.Scott (makers of receivers), and the stereo console was completely home built.

And then they hired Taylor, just out of the military, as their one and only employee.

Taylor dug in and developed what became, in effect, a brand new format – Beautiful Music – although he explains why he hates that term.

Moving to Philadelphia in 1963, he took what he learned at WHFS and formulated the music and approach at WDVR. It was only a matter of months before ratings growth was evident. To this day, the station had been a success in a crowded market.

Eventually, Taylor wanted to do it again, and so began a series of moves where, when the management supported him ratings jumped, but where management ignored his programming directives, stations stumbled and the format failed.

Over the years, his research and execution followed him as he repeated his ratings successes in different markets. Interest in his programming abilities came from large broadcast companies.

Eventually, the format was syndicated, and the book discusses the various issues that had to be overcome, tape bicycling (later satellite delivery), getting the right recordings (even commissioning recordings), getting stations to learn and follow the format rules, and competing with other programmers.

What shines through the book is how broadcasting always was more than a job for Taylor – as the book title says, it was his life’s passion. That meant that every recording, every word said on the air – the whole package – had to be as good as possible. “Good enough” was not good enough.

As the book progresses, Taylor relates how he reacted to the changes in the industry, especially in the 1980’s and 1990’s, and even considering retirement. In an industry where ego is often a problem, Taylor was known as a driven, exacting professional who was also a nice guy.

Then, satellite radio happened and, once again, the concepts he worked out were added at XM and quickly found and built a large audience. As if that were not enough, he then pitched in and created several more successful formats.

Active right into his 80’s, Taylor finally decided to late 2015 to retire. And, yet he relates that he has kept up with industry news, as it was so much of his life.

More Than a Good Read

If you have worked in radio since before consolidation, you will especially enjoy this book and you will want to read slowly, not only reflecting on and appreciating Taylor’s experiences and successes, but also his views on how the industry has changed over the years.

If you are newer to the broadcast industry, you will enjoy it as well, especially for the historic background on those same changes – and how they led us to the current state of broadcasting.

More information on RADIO … My Love, My Passion can be found here.

UPDATE: During the month of November 2018, Marlin will send two copies for the price of one, personally autographed, and shipping included.

Get your own copy here. 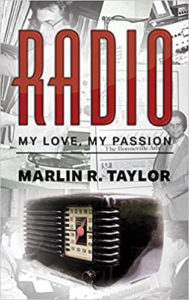