[August 2018] When starting a job at a new station, it is always wise to survey the entire site – but especially the critical program to transmitter path.

Sometimes something left behind from a previous engineer’s efforts can prove to be a trap for the new guy. It is a reminder never to leave a temporary fix without going back and finishing the job.

John Huntley recalls the day he took over the engineering job at a station, and started checking out the systems.

Sure enough, a “temporary” wire connection in the program chain was waiting for him. It was in the equipment rack room in the program audio chain at the end of a pair of 16-pair cables between the program line and the EAS machine, before going on the STL to the transmitter.

Oh, yes, the cables were sort of shoved under the rack, where the connection was not visible to casual inspection.

As Huntley noted: “I had been here all of three weeks when I found it the hard way.”

It seems at some point a switcher was removed, and the program lines were connected with pieces of paper clips, stuck in termination blocks.

And, yep, all it took was merely touching the wiring to knock the station off the air.

Huntley recalls: “It felt like a hour as I struggled to get all five paper clips back into both the connectors.”

You can see why: 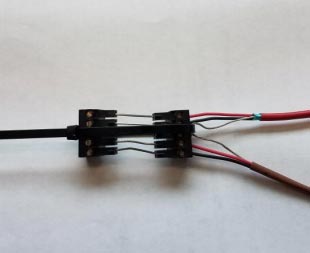 After the lines were reconnected

After quickly restoring the audio, Huntley put a tie-wrap around the connection to keep it secure for the short time until he had the opportunity to remove the patch and connect the wires properly.

Now, neither he nor anyone else would ever end up having to deal with such a flimsy connection.

The Worst I’ve Ever Seen! – a tribute to the line our late friend Richard Haskey would deliver upon seeing something like this at a site – is not designed to embarrass anyone.

Rather, this is a chance for us to learn from others’ experiences. And, OK, laugh a bit or spit up some coffee. Do you have a story of one of the interesting things that have happened as you do your job? Please share them with us all!