[December 2016] LED lighting got off to a sort of rocky start. Some stations did have success and lower electric bills, but other stations suffered through everything from interactions with the RF to premature failure and expensive costs from for replacing bad units. What advice would Rod Zeigler give those of you considering converting to LED lighting? Read on.

Five years ago I wrote an article describing my perception of the then current State-Of-The-Art in LED tower lighting technology and some of the pitfalls associated with early adoption of the technology.

At that time I had installed some new Dialight LED side-light beacons right in the aperture of an FM antenna. This spot had caused considerable problems in the past and could be considered a textbook case of RFI problems.

I am happy to report that we have had no problems with those two beacons since they were installed nearly six years ago.

In the interim we did have to replace the top (single) Orga beacon on this tower with a Dialight beacon. The new top beacon worked well for around two years but then started working intermittently. Finally, it quit altogether. A replacement beacon was ordered and installed.

Upon inspection of the bad Dialight beacon, it was found to have water the bottom where the power supply and power connections are. 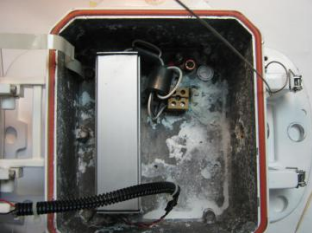 After we dried it out and, as a test, temporarily bypassed the power connection strip which was severely corroded, the light came on immediately with no indication of any malfunction.

However, just to be safe, we returned the beacon to Slatercom (www.slatercom.com) in Salem, OR. so the beacon could be checked and parts replaced if necessary. The factory said the only part needing replacement was the power connection strip. The power supply was well-sealed and had no problems.

Thus, the only problem we have suffered with the Dialight beacons was caused by an installation error, and the beacon tried to keep working even with a corroded power connection strip.

Also during the interim we have replaced the incandescent lighting on the KTIC AM & FM towers, KAMI AM tower, KNEB AM towers (sans one beacon), KRVN-FM Auxiliary tower, and have started the process on the KRVN (AM) towers as well.

To say that we are pleased with LED lighting (and Dialight through Slatercom in particular) would be an understatement. Eventually all our towers will be converted to Dialight LEDs.

One thing to keep in mind if replacing incandescent tower lighting with LEDs is that the current required for LEDs is much less. So you will need new current sensing equipment to continue remote monitoring of the tower lights.

This meant replacing some old, even homebrew controllers with new LED specific controllers from Slatercom. This process will continue until all sites get new controllers as they are converted to LED lighting.

Of all of the systems in our broadcast plants the LED lighting has now become my least worrisome.

Five years ago I was still skeptical, considering my previous experiences. Today I am sold completely because the State-Of-The-Art has reached a mature stage.

I wholeheartedly recommend conversion of any incandescent tower lighting to Dialight LEDs to save serious money, increase the visibility of the tower, and to dramatically decrease the headaches of incandescent lighting.

Rod Zeigler is the Director of Engineering for the Nebraska Rural Radio Association (KRVN / KTIC / KNEB / KAMI). Contact him at: rzeigler@krvn.com