Walking in Only to Find No Joy at All

Written by Dave Dunsmoor Posted in Richard Haskey's: The Worst I've Ever Seen!.

[December 2016] It is not unusual for the station’s engineer to get called out in rotten weather – especially to attend a mountaintop FM in the winter. It is a, after all, part of the job. But, sometimes just getting there can be the biggest challenge. Dave Dunsmoor remembers:

In my younger days, it actually took me a few years to discover how not to get a four-by-four buried up to its axles in old wind-hardened snow on a trip up to a mountain site.

So, when I got called in to help out at a station having a problem up on the mountain, it took all of about 100 feet to realize I was not going to make it all the way into the building site. In this case, it was just too cold to be shoveling for two hours – at about -8F, with a slight breeze out of the east – should I get stuck.

So, it was one of those “back down the hill and walk-in affairs.” I made a note to let young Jake know that if he needs access to either of the two stations for which he cares, it is either call the farmer with the tractor or just be ready to do the walk-in.

Oh, but the best part was when I finally made it up the hill and got to the transmitter building and … 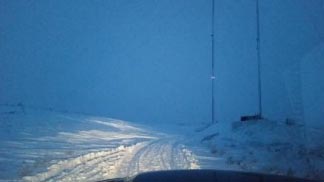 So close, yet so far due to the snow

… the key was not in the lockbox! After looking around, I tried digging below the box and in the general area, until it was clear that I was not going to find it.

I am sure that key is out there in the snow somewhere, but until the spring melt, what else can you do? Thus, I left and called the D.O.E. for the station. He will find a spare and ship it to me. Then I will return to the site.

My lesson from this trip: it is now past the right time for me to get my own key, and put it on my keyring, instead of just relying on the one supposed to be in lockbox.

Do you have a story of one of the interesting things that have happened as you do your job?