[July 2010] In recent years, LED lighting has become very popular. From those tiny keyring-LED lights to the multiple LED flashlights to stoplights on the streets, these long-lasting, bright, power-sipping lights are showing up in more places. Are they ready to replace your tower beacons and lamps? Here is what Rod Zeigler learned:

LED tower lighting has been available for a number of years. Long story made short: some love it, some hate it.

In theory, LED lighting is cheaper to run and has a longer life span than incandescent lighting. Incandescent beacon fixtures take two 620 Watt to 700 Watt lamps using 1.24 kW to 1.4 kW of power when on. The first generation LED beacons used 100 Watts of power when on. The current generation units, those now being shipped, only use 20 Watts of power.

For instance, if you live in a 12 cents per kWh area and spend an average $800 for annual maintenance (re-lamping, etc.) an LED system will pay for itself in 3.5 years. Now, if all of this is true, everyone should be using them exclusively – and the retrofitting of all existing structures should be undertaken as soon as possible. Reality has proven otherwise, and the story I am about to tell will detail my experience at both ends of the spectrum.

Trouble at the Top

In 2006 the Nebraska Rural Radio Association, in partnership with Bott Radio Networks, undertook the construction of a new multi-user transmitter site, including a 1000 foot tower on the bluffs south of Lexington, Nebraska. LED lighting was specified in the bill of materials, and Dialight LED lighting was supplied and installed as the tower was erected.

The LED obstruction lights worked wonderfully from the start and have never been a source of problems. The beacons, however, were a different story. Some of them did not work when installed, and some worked for a while and quit.

If the temperature was close to, or below, 30 degrees (F) at sunset, they just would not work, so the beacons were left on to stay warm during these conditions. Eventually, we found out from the vendor that this was not an uncommon problem. We were told that they eventually rented a refrigerated semi-trailer in which to test the lights.

Now it Was My Problem

I came to work for the company in the spring of 2007, and this was one of the very first issues I had to confront.

During that spring, we had some more of the beacons quit completely – and replacements were sent for them. This would have been the 3rd replacement in less than a year for one particular beacon. After many conversations with the vendor (who shall remain nameless), they decided to replace all of the Dialight beacons with Orga beacons – which had been used quite successfully on wind generators along the North Sea, so they should be able to take the cold of Nebraska!

These were installed in June of 2007 and worked well, for about six months. I will say in the vendor’s favor that they did pay for the labor to remove the Dialight beacons and install the Orga beacons. But, after six months of flawless operation, we started seeing intermittent operation on the mid-level set of beacons. This time the malfunctions were determined not to be temperature related (the main problem found on the initial installation).

A Change From Temperature to RF Sensitivity

This tower has 3 separate, multi-bay, ERI Rototiller antennas on it – each for full C1 operation. The midlevel beacons are between, and on the back side of the tower from, elements four and five of the bottom, 12-bay ERI SHPX antenna. 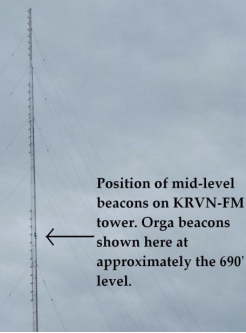 All transmitting equipment was new, and installed at roughly the same time. Neither spurious emissions nor any indication of abnormal operation was ever experienced with any of the stations. The bottom antenna did not go live until May of 2007 while the top two antennas had been live since December of 2006.

By shutting down the transmitter for the bottom antenna, we could get the mid-level beacons to start again, and they would stay that way when the transmitter was restarted. As the weeks went by the time they stayed on between “restarts” started getting shorter and shorter.

Eventually the restarts did not work, but only one beacon stayed dark, the other gave a short flash, every other flash cycle. NOTAMS were becoming a habit, and this was one habit we just were not going to support! Meanwhile, we experienced only one or two problems with the top beacon – and never any issues with the bottom level beacons.

During this process we discovered having current on the line to the beacon did not mean that the beacon was lit. Apparently the power supply was drawing current, but the LED’s were not illuminated. We later determined that our top beacon problems were from ambient light in the early evenings fooling us into thinking that it was off while the rest of the lights were on. We treated this as another fact to add to growing list of things we took in consideration to determine the root cause of our problem.

While this was going on, consultation with the vendor caused us to spend quite a bit of money and time working on fixes. One suggested remedy was installing a separate ground wire to all of the beacons. This was accomplished and no change in operation was seen (at mid-level, one was still intermittently operating, and the other one was still off). After reporting this to the vendor the next day, I was instructed to cut the ground wire at the base and see what happened that night. I already knew the answer to this one, but did it anyway, and again, no change.

We had now spent over $5k to purchase and install a ground wire, just to cut it the next day! Eventually we had to have this experimental ground wire removed to the tune of another $5k. I tried to work with the vendor as long as possible to make sure that any warranty issues would be covered. Sad to say, I discovered I was totally on my own to find a permanent solution to this problem.

I then turned to the vast experience of the Broadcast List (www.radiolists.net) requesting any ideas that might help with the situation. Chuck Lakaytis, Director of Engineering for Alaska Public Broadcasting wrote me that he had just attended a presentation by Dialight on their new LED beacons. These beacons were reportedly much more robust and were also able to withstand high level RF conditions. He also gave me contact information.

I was somewhat skeptical due to the experience with their earlier beacons, but I decided a phone call could not hurt and called Jerry Ehlers at Dialight. He in turn put me in contact with Alan Slater of Slatercom-WCD in Salem, OR. After hearing my tale of woe, Alan sent out two beacons, with their supplemental filtering package installed, to demo. These were installed in early January of 2009, with a winter storm expected to hit the area that evening.

The first night they were in operation it turned very cold, quite windy and moderate snow fell. Nothing like a trial by anti-fire. The new Dialight beacons worked that night, and have worked every night since then.

The Orga beacons the Dialight units replaced were brought into our shop and bench checked. Neither beacon showed any problems whatsoever. They were left burning for 48 straight hours without a hitch. Obviously the high RF field was causing the switching power supplies to malfunction.

Al Slater of Slatercom-WCD wrote the following about my situation in particular: “So far I still believe that the RF issue with these lights is that RF is being conducted in the power cable and seriously affecting the switching power supplies these lights use. To that end, my theory is that the capacitors especially are not designed for higher RF fields and may over time degrade to a point where the problems you experienced happen full time.” My thanks to Alan and Mike Slater at Slatercom-WCD for technical information to include in this article and all other help they have given me.

I attended the 2009 NAB Show in Las Vegas and, while there, I talked to Mr. Slater and let him know that his Dialight beacons were working wonderfully. I also had the privilege to speak with the original vendor. He had two Orga representatives in his booth while I was there, one of which was an engineer.

The vendor kept trying to tell all of us gathered in his booth that it was a grounding problem. The engineer listened to my story, asked some questions and agreed with me that RFI was causing the power supplies to malfunction. He also admitted that the units were not designed with high RF fields in mind and had nothing designed into them to counteract that. The vendor did not have much to say after that.

I cannot say that the latest generation of Dialight LED beacons will work flawlessly in every situation. However, I can speak to my experience with them, and I will continue to recommend them for use in high level RF, FM broadcast situations, like the one I have here.

Rod Zeigler is the Director of Engineering for the Nebraska Rural Radio Association (KRVN / KTIC / KNEB). Contact him at rzeigler@krvn.com