Dealing With the Curse of Unobtainium 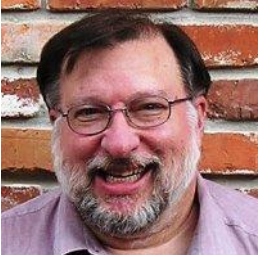 [May 2013] Sometimes doing repairs is as easy as exchanging modules. Other times, just finding a replacement part can become a real hassle. As technology leaps ahead, Mike Patton sees more and more parts becoming unobtainium. Some solutions are offered.

No one can dispute that many pieces of broadcast gear we work with every day are aging – as are we engineers.

And while many stations have been replacing transmitters and audio processors with new, state-of-the-art units, many others continue to do just fine with gear that was installed when Reagan was still an actor.

Nevertheless, as this gear ages, it becomes harder and harder to find replacement parts. Some items, including many op-amps and some logic ICs, have become all but unavailable at any cost. Some refer folks to them as unobtainium.

One contributing factor is that the broadcast business is very much a cottage industry.

One way to look at it is to simply run the numbers: there are roughly 11,000 FM and LPFM stations (not counting boosters and translators) and 5,000 AM stations.

If every station in the US bought an ACME Widget, the ACME Widget Company would sell less than 20,000 units. By comparison, Samsung or Apple considers sales of a given model disappointing in they do not sell millions and millions.

Obviously, the broadcast business commands essentially zero marketing clout when part manufacturers have to make end-of-life decisions about their aging flock. This lack of clout, and other factors, leaves the makers of broadcast gear and those of us who service that gear independently often scrambling to secure parts sources for legacy gear.

The result is broadcasting equipment suppliers themselves often end up with labors of love instead of profitable enterprises on their own merits.

For an example, you need not look much further than the recent sale of Harris Broadcast, with its roots in the Gates Radio Company, arguably the most successful – and surely the largest and best-known – maker of broadcast gear in the industry. Their parent company carried them for many years with profit margins that made them almost more of a liability than an asset and, finally, they pulled the plug.

Harris now joins a long line of previous well-known companies that found good reasons to bail out of broadcasting, including:

Each sale or withdrawal from the market causes a variety of parts to become hard – or impossible – to find, joining the unobtainium category.

A major reason for the problem has been the rapid advancement of technology, especially when it comes to ICs.

For example, many classic compressors use a specialized type of op-amp called an Operational Transconductance Amplifier (OTA), which allows the designer to produce a nice, linear, low-distortion Voltage Controlled Amplifier (VCA) with it.

Introduced in 1969, the RCA CA3080 OTA has been “obsolete” for years and is now basically unobtainium

There were several types of classic OTAs developed back in the 1960s and 1970s by various chip makers – starting with the CA3080 made by RCA – but in such small numbers that they are essentially all gone now.

Not only are the designs and equipment used to produce them obsolete but no chip maker could justify trying to make another production run of these OTAs without completely redesigning the chip using today’s techniques.

It would be the equivalent of tooling up a modern robot assembly line to make a Model T!

This is just one example. I could tell you stories about such unobtainium parts from now until they turn off the last transmitter – and there are new ones to be told every day.

Fortunately for us cottage-industry types, there are still pockets of stock here and there that find their way onto the market. There are even firms who make their living in the “parts scavenging” business.

Unfortunately, often the only way they can survive is to sell lots of 100 or 1000 of an item at a time; onesie-twosie sales are either not worth their effort to stock or are sold at extortionate markups.

Another example: it is getting hard to find some values of axial capacitors (the ones that have one lead on each end).

Many parts houses still have them, but the types offered by the manufacturers have been reduced and the prices have been greatly increased, both signs that The End is in sight.

Too Difficult to Fix?

Moreover, the pace of obsolescent has increased in recent years.

The rise of surface-mount devices (SMDs) and the much-lower automated assembly and parts costs associated with that technology has irrevocably changed the printed-circuit board industry. 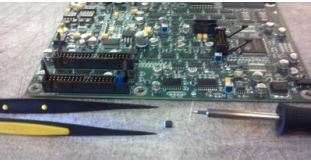 SMDs present a real challenge during repairs, as on this DAX-1 exciter board

As many techs have found out, SMD ICs are much harder to work on, with their large number of tiny leads, unless you have specialized equipment. But equipment makers generally do not take that into consideration; they are scrambling to keep their assembly costs down – that is their driving force.

All too often, especially after power surge or lightning damage, it can end up being cheaper to buy replacement gear than replace the SMDs.

Another major problem is being able to figure out what parts are being used. This is an old battle, with manufacturers using various tricks to obscure the IDs of their parts, such as removing the IC markings (and even resistor color codes) or making sealed assemblies of proprietary modules and circuits.

Others, such as Nautel, publish the manufacturer and part number for every part in their gear, and always have done so – my hat is off to them.

When You Can Find Parts

Obviously, the ownership and management of the makers of broadcast equipment – at least the publicly-traded ones – are under a great deal of pressure from their corporate masters to turn a consistently high profit.

This forces them to try to make their parts and service departments profit centers. This may be good news for their pension fund owners but it is bad news for you and me as users of the gear. The major manufacturers often put markups on their parts that range from 400% (i.e., four times their cost) to well over ten times their cost.

The result is that breathtaking phone call when you ask for a $10 part and learn it will cost $160 or more!

Needless to say, I do not buy a lot of parts from the manufacturers in my repair shop; if I did, I could not make a living.

With many broadcast equipment manufacturers having either gone out of business or ended any support of their older models, firms such as ours have tried to step up to the plate and offer what services we can to provide parts and depot re-pair work on these “orphan” units.

Occasionally, we have seen the need to develop some “workarounds” including little daughter boards to adapt a modern IC to an old circuit.

For example, at our shop, we have developed an upgraded RF oscillator PC assembly for use in any SX-series transmitter. It just plugs in, in place of the original.

We also are working on a replacement for the digital displays in those transmitters, which will use a modern display type and give even more information (no more looking up the code; the display will show the parameter’s name.)

At times, it is quite an endeavor to find the right parts to take care of these needs.

Last year we bought a bunch of power transistors from Hong Kong that looked just like legitimate ones, in-side and out (we cut the tops off of the metal cases to see), but which consistently blew up in a real transmitter after only a few hours usage.

In the end, there was no way to get our money back – we had to eat a several-hundred-dollar order. I still buy parts from Hong Kong distributors but these days I have learned to buy a few of each type first, to test and verify legitimacy before I place any major orders.

As we deal with our clients, we continue to find more and more of products that no longer have replacement parts easily available.

Responding to the perceived need, we maintain a number of working transmitters and other gear in our shop. We can use them as test beds to aid in the repair of products like Omnitronix, Harris MW and SX series AM transmitters, and others. 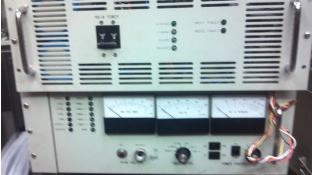 A 1 kW Omnitronix transmitter on the test bench

Using a wide variety of sources, I do almost all of the parts ordering for my team of bench technicians. Some days, my quest for hard-to-find parts find me chasing suppliers from here to Hong Kong, from eBay to the surplus houses in Houston and Dallas.

When asked how I make my living, I sometimes – and only semi-jokingly – tell folks that I am an expert on the procurement of unobtainium and other obsolete electronic parts.

That usually elicits a funny look, and it opens the door to many a discussion about what to do when you discover you need a part which, while you were not looking, may have become unobtainium.

A listing of various items often described as being unobtanium – and some notes on possible
substitutions – is located here.

Michael Patton is an industry veteran known for tackling hard-to-repair gear. He is President of Michael Patton and Associates in Baton Rouge, LA. You can contact him at: mike@michaelpatton.com