An Economical Way to Erect A Fence 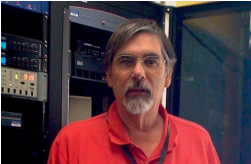 [June 2013] Site security includes a good fence. But that can be a budget buster, especially for the more remote sites or those that are just on difficult terrain. Bill Putney came up with a great idea to solve the problem at his station.

Here is an interesting approach that we took to install fences at the KPTZ tower site that might be of use to others. It is probably even more pertinent on mountain tops than in metro areas.

When we decided to put the security fences up at KPTZ I shopped around for fencing contractors. Since the Port Townsend area is in a rural area, it is remote from some sorts of services. So, in a way, we are kind of like a mountain top site.

The bids I got all came in at about pretty much the same cost: So many people at so many hours with travel and so much per hour plus materials.

However, as with many stations, our budget was pretty tight. So I did not stop there.

I started with the idea that maybe I could find some of those portable chain link fence sections owned and rented to construction sites, etc. by then rental companies, perhaps finding some used sections that could be purchased at a discounted cost.

Unfortunately, it turns out those portable chain link fence sections owned by rental companies are either good enough that they do not want to sell them at a discount (or at all) or they are just trash. In the end, it turned out not to be so much of a good option.

Then I found a local company – this one was in Tacoma but a Google search finds them all over the country – that is in the business of making portable fence sections.

Have it Your Way

This company, and many others like it, manufacture the fences in a covered warehouse on jigs.

And they make a lot of them.

They will make the sections whatever size you want. Even better, their costs are low and there is never any “travel time.” Then they just get loaded on a truck and delivered to the site and dropped off.

We ordered the necessary fence sections from the company, getting 8-foot by 10-foot, and 8-foot by 5-foot sections, plus mounting hardware.

When the posts were delivered I found they slipped snugly into a piece of 3-inch PVC electrical conduit we had as surplus on site.

The installation process actually turned out to be pretty easy. We used a rented, trailerable, post-hole digger, then measured out and dug all the post holes to a depth of 2.5 feet. We then put a piece of the conduit in each and filled in the hole with a bag of Ready-Mix. 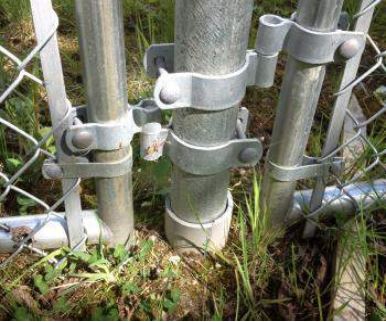 Because the top of the conduit only stood a few inches above the ground I did not have to guy it while the concrete set. I just used a piece of fence post to square up the conduit in the hole as the dry mix was poured in and then gingerly took that out and moved on the next hole.

When I came back a week later all the concrete was rock hard and we could assemble the fence.

Fitting it All Together

I only had myself and one assistant to install the fence the day before we were to start transmitter testing. However, since it was only a small area to be enclosed, we were able to get it done pretty easily.

We quickly slid a fence post into each of the conduit lined holes.

The fence sections were light enough we could lift them with a little effort and attach them with chain link fence gate hinges on both sides (the bottom set pointed up and the top set pointed down). 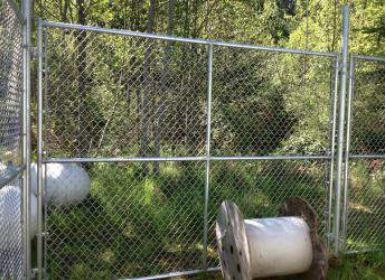 The sections hung easily on the hinge brackets

To make an operable gate for access to the enclosed area, we picked one fence section and used two smaller fence pieces (4-foot by 8-foot) with a gate latch on one side. 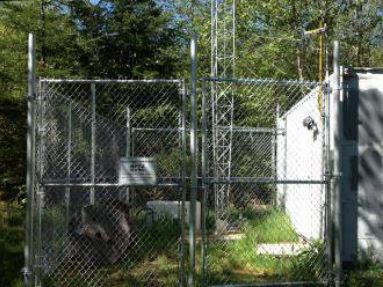 The right side is set for use as a gate

In retrospect, one of the nice features of this installation is that if we have to do any tower work that requires getting equipment close into the tower, all we have to do is just take the fence sections down, take the posts out of their conduit sleeves, and have the area completely clear for whatever work needs to be done.

When the work is finished, it takes just minutes to re-install the fence poles and sections. Much easier than it would be with on site built fence.

The installation of a 10′ x 20′ enclosure took the two of us less than an hour. The best part is the project cost about 30% less than the built-on-site fence quotes we had gotten.

Bill Putney is the Chief Engineer for KPTZ, Port Townsend, WA. You can contact Bill at: billp@wwpc.com