WWV: All Time, All of the Time

It is still out there. All you need is a radio capable of receiving 2.5, 5, 10, 15, and 20 MHz. One of these frequencies is available virtually anytime, anywhere in the country.

As you listen, the voice will tell you the time with a tone to synchronize your watch, clock, or automation.

Now run by NIST in Ft. Collins CO, WWV began in Washington D.C., with testing in May of 1920 on 500 m (approximately 600 kHz), after receiving its license and call letters from the Department of Commerce (DOC) on October 1, 1919.

In cooperation with the Department of Agriculture, in 1920 WWV broadcast farm bureau market news. But, with other early stations broadcasting news, it was decided WWV would focus on standardized frequency signals, at first in the 200 to 545 kHz band.

From 1 and 2 kW transmitters, frequencies of 75 kHz to 2 MHz were transmitted with “better than 0.3% accuracy.”

Over the years, the transmitters moved from DC to Maryland, and grew in power.

As the focus on time continued, the transmitted frequencies “settled” and tones, and then time announcements were added.

In 1936, a 440 Hz (“A abovc middle C”) was sounded on the hour, and soon more pulses for the seconds. Telegraphic information began in 1945 and on January 1, 1950, voice announcements of the time began every five minutes, in local time.

It was December 1, 1966 when the current site – Ft. Collins, Colorado, went online. Some photos are here.

With the new site came new transmitters. Frequency stability was now less than 1 part in 1013 deviation. Time accuracy is kept closer than 0.0001 millisecond which, even with signal delay, keeps it within 10 milliseconds at most US reception sites. Scientists and engineers were able to use this to achieve high calibration of all sorts of test equipment. 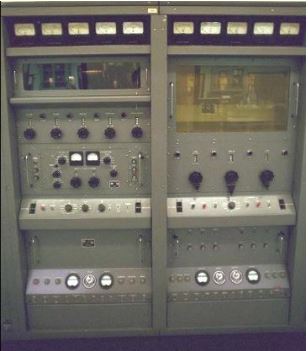 In the past couple of years, the availability of time checks via the Internet have led to rumors that WWV might be shut down to save $6 million. However, the 2019 Budget did preserve funding for the operations. WWV’s web site is here.

WWV does transmit some additional services at various times, including satellite GPS status and some geophysical matters.

In addition to WWV (2.5 to 10 kW), NIST now operates sister station WWVH Kauai, Hawaii. WWV uses a male voice, and WWVH uses a female voice, so listeners can tell which station they are receiving. Announcements are staggered to avoid both being heard at once.

To commemorate 100 years, WWV has scheduled an special event. Unfortunately, all the RSVPs were allocated rather quickly. Some information is here.