[October 2019] As more stations co-locate and LPFM and translator facilities are built, some good questions arise: Does dangerous radiation emit from your station? What can you do if a government agency claims you are endangering local residents? Educating yourself now might save you a lot of grief, not to mention lawyers’ fees.

The word “radiation” can mean many things.

There are many examples: X-Rays, nuclear power plants, high voltage power lines, atomic weapons, or even the natural background radiation from Radon or cosmic waves.

Although the level of danger from radio or TV RFR is known to be minimal, just the word itself – radiation – can cause severe anxiety to many of the general Public.

The disaster a few years back, at the Japanese Fukushima Daiichi nuclear plant, for example, not only brought the issue to the top of the news cycle, it started a wave of power plant closures around the world, even in places where the plants have been operated safely for decades.

With such a background, it is not uncommon in these days of environmental activism to hear broadcasters accused of “radiating our children,” or something like that.

Dire scenarios of what RFR “might” do clog zoning hearings and are the source of many Health Department complaints.

NIMBY (Not In My Back Yard) and BANANA (Build Absolutely Nothing Anywhere Near Anything) groups often bully officials to deny or complicate construction – and even visit existing plants to “find” problems.

What would you do if some bureaucrat, perhaps a county health official, called and asked about your radiation pattern?

Of course, stations not only have to consider the FCC Rules for operation, but OSHA and EPA Rules as well.

Problems can come up during the normal application process, where a station might be asked to prove compliance with various RFR and local zoning regulations, as well as those required by the FCC.

As anyone who has dealt with the bureaucracy knows, usually you start out having to deal with two main problems, each of which could lead to big costs in time and money:

(1) Most bureaucrats know very little about the science involved, and

(2) They have all the time and money and staff on their side. The wrong reaction to such officials could cause big problems.

On the other hand, a useful pro-active approach was taken by KPTZ (FM) in Port Townsend, Washington.

The study of non-ionizing radiation (NIR) from the engineering package supplied to the FCC in the Construction Permit process was already available. Station engineer Bill Putney said, “All that became part of the public record for us when we applied for the zoning and building permits.

“Local Building and Safety had the material and went over it, [before] allowing the station to build,” he said.

Unfortunately, as Putney notes, “There’s a lot of non-science out there that claims all kinds of harm and people are really nervous about it. I don’t think it’s a good idea to take these fears lightly.

People really need to know that you have taken all the precautions and take their concerns seriously.”

When They Keep Coming

Still, even after the process, a station occasionally faces problems from an over-anxious official, driven by an accusation that a radio station is radiating so much RF as to be dangerous to humans.

That makes handling such a contact equal parts science and public relations – or it might just be 95% public relations. Getting off on the right foot is essential in these situations.

Putney took the high road, and sought to make the exchange as pleasant as possible. He also made a real effort to put the core issue in layman’s terms, in a way that the official had to appreciate: 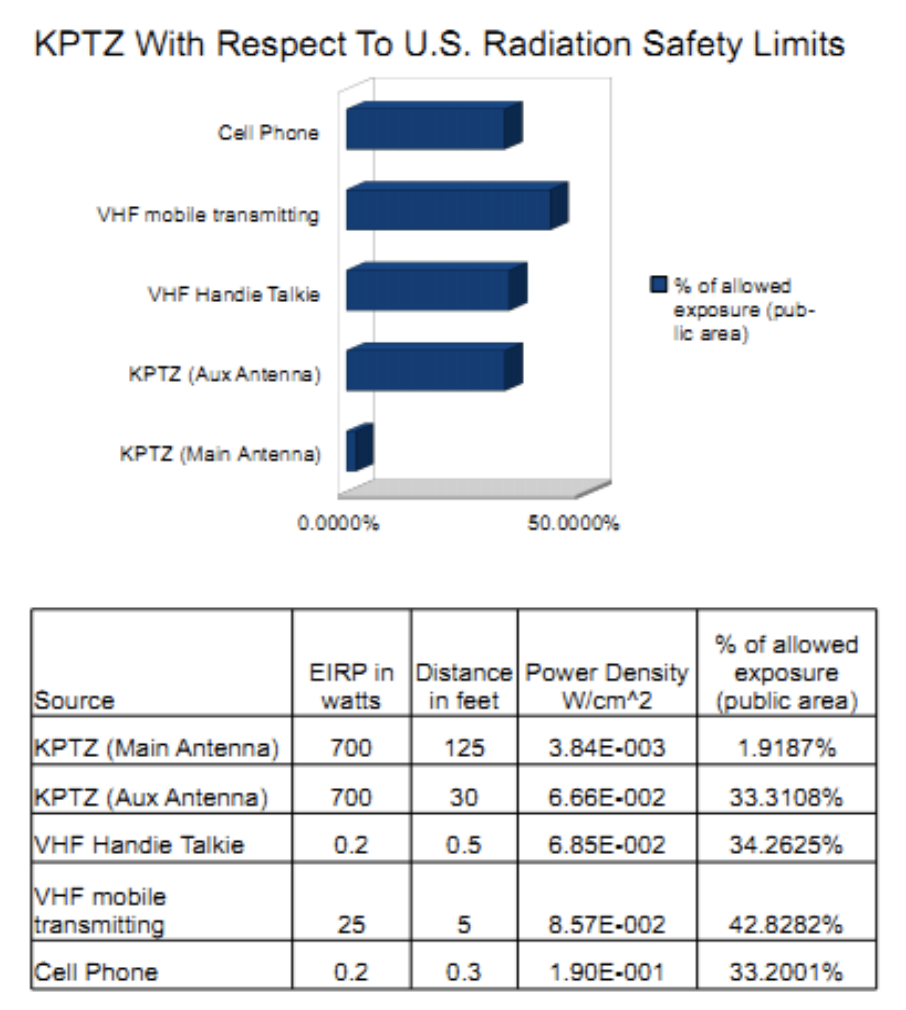 “I made a little bar graph that showed the exposure of a person on the ground at the transmitter site vs. other sorts of NIR (cell phone, two-way radio, microwave oven, etc.). That helps put things in perspective and isn’t so dry and technical,” he said.

Putney kindly supplied a full-sized pdf copy of the above bar graph and the data he supplies in relation to KPTZ, which is located here.

An Excel spreadsheet, where his calculations are embedded is here. You can adapt the formula to your specific site situation, antenna, and power level.

By being proactive, and preparing a similar bar graph and data for your station, you will demonstrate that you are sensitive to community concerns well beyond the “We are licensed by the FCC, and that is all that is important.” With any sort of reasonable person, this should help resolve the issue quickly and amicably.

Our sincere thanks to Bill Putney for sharing his approach to solving the problem – and the graphic presentation of his calculations.