[October 2021] After 100 years, pioneer station WWJ is still operating in Detroit – the only AM station in the top four stations locally and, as fitting from its original owner, The Detroit News, a news source for the community. Thomas White put together a look at the early days WWJ, from its days as 8MK – more than a month before 8ZZ (KDKA) – to WBL and WWJ.

From 20 Watts under the Detroit News ownership, a series of power increases under CBS ownership (1987, merged into Viacom, then sold to Entercom, now Audacy) led to a 50 kW installation in 2000.

WWJ celebrated its 100th anniversary on August 20, 2020, so this would be a good time to bring up-to-date the information I have found about this pioneer station.

Cynthia Boyes Young’s “WWJ – Pioneer in Broadcasting,” from the December, 1960 (Volume 44, #4) issue of Michigan History, provides the most comprehensive overview that I am aware of about the establishment and early history of 8MK/WBL/WWJ.

Young notes that the “The actual beginnings of the Detroit News radio station… can only be partially pieced together from the reminiscences of radio pioneers” and “the actual sequence of events leading to the decision to purchase the transmitter are obscure,” but still her review is very valuable for filling in many of the missing pieces. For some reason it appears to have been largely forgotten — I highly recommend it, and have put a PDF copy here.

The Detroit News had limited in-house experience and expertise for setting up a radio station, so William E. Scripps, publisher of the Detroit News, turned to outside help.

This is one of the areas where the chronology of events gets vague but, in early 1920, Clarence “C. S.” Thompson, an associate of Lee DeForest, began promoting the establishment of broadcasting stations by newspapers via a company he founded called Radio News & Music, Inc. There was a short article about its formation in the March 13, 1920 issue of The Fourth Estate, followed by a couple ads promoting radio broadcasting for newspapers as “something new on which to build for circulation and leadership,” which I have posted here.

There was also a short notice about the formation of The Thompson Company advertising agency in the March 18, 1920 issue of Printers’ Ink. Beginning in the same issue, three advertisements for The Thompson Company and Radio News & Music promoted “Providing for the daily distribution of News and Music by wireless” obtainable by a “Franchise open only to one newspaper in each city.” (You can see those ads here.)

It is not clear if these ads provided the link between the Detroit News and Thompson’s company, or if there had been earlier contacts, but in any event the Detroit News became the first – and likely only – newspaper client for Radio News & Music. 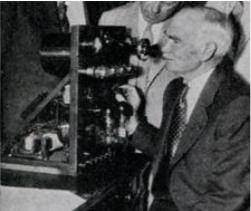 However, that seems to be the limit of Radio News & Music’s involvement, and it was the newspaper that arranged to have the transmitter set up at its headquarters.

Michael D. Lyons, a prominent local amateur, then was hired by the Detroit News to do the initial set up of the transmitter and antenna system. Jeff McQueen uncovered additional information about Lyons, “WWJ, A Jesuit and the Bomb,” which is posted at Barry Mishkind’s site: oldradio.com. Also, in 1973 Lyons wrote a short letter reviewing the initial installation.

Frank Edwards then took over as The News’ technical lead.

While the station was being set up, Elton M. Plant noted that publisher “Will E. Scripps… was an avid fan. He used to drop in at night to check on how we were doing, and ask if we were getting out on the air. He was as boyish about it as anyone could be. He was quite thrilled about the whole setup. Apparently he could see in it, something more than the rest of us.”

ORIGINS AS AN AMATEUR STATION

The initial station license was for a standard amateur station, assigned the call letters 8MK.

In his 1973 letter, Michael Lyons stated that “The News and Music Company… which supplied the transmitter was asked by the Detroit News about patent infringements…” I suspect the station was initially licensed as a standard amateur station because although Lee DeForest had sold the commercial rights to his radio patents to AT&T, he retained the right to sell equipment for amateur and experimental use.

So an amateur grant would be a “license of convenience” designed to avoid any complaints from AT&T. (There were also no prohibitions on an amateur station operating a broadcast service at this time.) 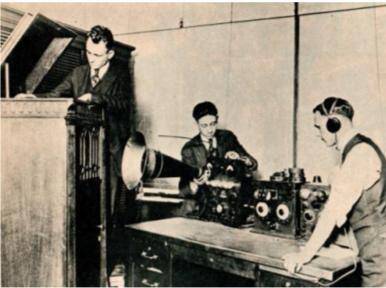 Next the station broadcast results of the State, Congressional, and County Primary Elections, calling it the first time a newspaper had used “the radiophone in the transmission of news.”

The Department of Commerce normally provided information about standard amateur stations only once yearly, every June 30th, in its “Amateur Radio Stations of the United States” publication. 8MK does not appear in the June 30, 1920 issue, but is listed in the June 30, 1921 3 edition, with the owner reported as “Radio News and Music (Inc.),” Detroit, Michigan.

However, additional sources have varying information about who was associated with 8MK. In the April 4, 1920 issue of the Pittsburgh Gazette-Times, C. E. Urban’s “The Radio Amateur” column (Fifth Section, Page 12 [whole page #49]) lists 8MK as newly assigned to Howard Bowman, 171 Kenilworth Avenue in Detroit.

Bowman appears to have been a Detroit News employee — the November 7, 1917 issue of The Fourth Estate has a reference to “Howard Bowman of the Detroit News.” (Online issues of the Pittsburgh Gazette-Times are available here.)

Howard Bowman is also listed for 8MK in the “Local Calls” list on page 6 in the August 17, 1920 issue of a local amateur radio publication, Detroit Radio News. However, page 4 of the next issue, dated October 30th, 1920, now lists 8MK as “Detroit News (Fone), Cor. Second and Lafayette Ave., Detroit, Mich.”

In addition, the May, 1922 Consolidated Radio Call Book lists 8MK as “Radio News and Music, Inc. (M. D. Lyons), Lafayette and 2nd Ave.” Finally, in his 1973 letter, Michael Lyons wrote that the license had been initially issued under his name. I am not sure how much the name on the license matters, since the station was located in the Detroit News building, its operations were funded and staffed by newspaper, and beginning in August, 1920 the station, whether operating under the call sign of 8MK, WBL or WWJ, was consistently referred to as “The Detroit News Radiophone.”

Things had become more complicated the following year when The News requested a Special Amateur license (which would allow operation on a less congested wavelength) and the Department of Commerce responded by granting it a Limited Commercial license, with the call sign WBL.

I assume that operating a DeForest transmitter under a Limited Commercial license would have left The News on shaky ground with AT&T, but a few months later The News bought a transmitter from AT&T’s Western Electric subsidiary, which would have eliminated any concerns about infringing on AT&T’s commercial radio patents.

It appears that, for the first few months, WBL used the same DeForest transmitter at the same location that had been used by 8MK, now operating on a better wavelength of 360 meters. And, overall, the station continued to be identified as the “Detroit News Radiophone.”

OPERATION AS AN LMA

The transmitter was originally leased from Radio News & Music.

But given the newspaper’s full responsibility for station operations, the setup appears to be similar to a modern day Local Marketing Agreement (LMA). (According to Young, although initially leased, the newspaper eventually purchased the DeForest transmitter.) 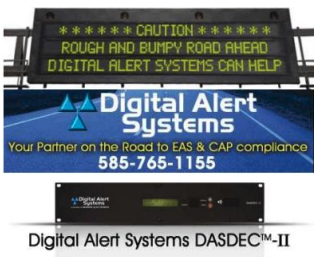 Fourteen months after the Radio News & Music advertisements in Printer’s Ink, the Detroit News began running its own ads, proclaiming in the May 23, 1922 issue its status as “The Pioneer in Radio,” although the text of the ad seems to narrow its claim to being just the first newspaper to establish a broadcasting service.

Cynthia Boyes Young’s article also provides detailed information about the reason behind the March 3, 1922 call sign change from WBL to WWJ. It turns out it was merely for phonetic reasons.

The News wanted a call sign that was easier to understand through static and interference. Accordingly, the paper requested a call change to either WWW or WKL, but Samuel W. Edwards, the 8th district Radio Inspector, assigned WWJ, with the note that “This is about as good as we could do in the matter of call letters.”

I did some additional research, and it turns out that neither WWW or WKL actually were available at this time. WKL was already assigned, and there was a policy against issuing calls such as WWW with the same letter repeated three times, so it appears that Edwards just did his best to conform with the spirit of the request, by assigning the most phonetically distinct of the small number of WW– calls still available.

However, it is interesting that The News was emphasizing its station’s call sign at this early stage, since most stations at this time were best known by their sponsoring firm, and the actual call letters were generally of limited importance.

For those wishing to do further research on WWJ’s early history, I have also posted a number of scans of early Detroit News pages containing articles about the station’s start

Broadcast Historian Thomas H. White has long had a passion for tracing the beginnings of the industry, and has done a monumental amount of research in the FCC records, the National Archives, and other sources. Thomas White’s email is whitetho@earlyradiolistory.us

White’s web site has a tremendous amount of broadcast history, including narratives on how the AM band came together, call sign history, and much more. (Warning, you will spend a lot of time on this site!)

If you enjoy learning more about Radio History, we invite you to subscribe to the one-time-a-week BDR Newsletter. Please take just 30 seconds, sign up here, and you will know when more articles are posted.