Because the public at large is often frightened by scaremongers regarding the effects of RF radiation, broadcasters need to be aware of those areas at transmission sites where RF radiation can be an issue.

The OSHA and the FCC have, in recent years, focused more attention on the measurement and signage for protection of the public. But, then there are some members of the public that have their own approach.

At one time, tower crews regularly would climb through operating FM antennas or merely jump onto an operating AM stick.

If you could not see the RF, it could not hurt you, they reasoned. Some would eschew footware while working on steel.

We Do Know More Today

Today, with much more science behind us, we are much more aware of the interaction of radio waves and the human body.

So now the routine, especially at shared sites, is checking with RF exposure meters and using RF suits, coordinated power reductions – or just plain go off the air during antenna installations and repairs, unless there is an auxiliary antenna and/or site that can be brought on line.

With all this attention – and with the required posting of warning signs – even non-broadcasters are getting more and more cautious around transmitting antennas.

Of course, as with any precaution, things can get a bit out of hand.

We were told this story about an older air conditioning man who, along his new helper, came out to a broadcast site a couple of years ago to repair an A/C unit.

On the way up to the site the veteran mechanic instructed his younger helper to be careful – and not to be touching anything because of “all the RF that was flying around on the site.” It seemed like he was suggesting a decent precaution – at least he was instructing his assistant to err on the side of safety.

Nevertheless, when he got out of the truck it was apparent that his level of concern was more than usual. 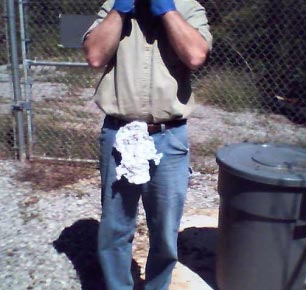 The question is: is it OSHA approved?

The engineer who took this picture realized the mechanic was genuinely scared about standing next to the tower.

As you can see clearly, he was wearing his homemade tin foil “family jewel protector.”

The fellow’s name and location are redacted to protect the … err … protected.

Have you seen something strange at a broadcast site? Please share your pictures with us! Names, and places are optional; embarrassment is not the goal, rather finding a teaching moment.