When VSWR is Not VSWR

[May 2015] When setting up a transmission system, the goal is always to achieve the lowest reflected power (or VSWR – Voltage Standing Wave Ratio), which indicates how efficiently the signal gets from the transmitter to the antenna.

Sometimes you can accomplish the goal … and yet strange things still happen. Burt Weiner explains.

A client called me after they had installed a new 1 kW solid state AM transmitter to replace their tube transmitter.

The problem was that when they tried to turn on the new transmitter, the VSWR was so high that the transmitter would not come on.

This particularly concerned me because only a few weeks earlier I had repaired and re-tuned the station’s Common Point network.

Everything is Off, But the VSWR

I suspected that I knew exactly what the problem was the instant I arrived.

Coincidentally, this site is about a half-mile from another AM that operates at the opposite end of the AM broadcast band with 5000 Watts but with its main lobe looking right into my client’s two-tower array.

Disconnecting the antenna from the turned-off transmitter by pulling the Common Point J-Plug caused the reflected power meter reading to drop to zero.

It turns out the older tube-type transmitter was never bothered by the other signal coming into it, and the previous NRSC proofs did not show any inter-mod products betwixt the two stations.

A Filter Saves the Day

Foraging through the station’s “junk” I found enough parts to cobble together a band-pass / band-reject filter to insert between the Common Point input and the transmitter. 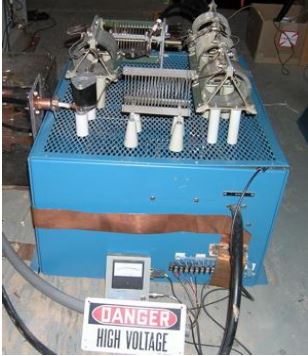 In the picture, all but one of the coils were in series to get the low frequency notch. The filter consisted of a series resonant L/C for the pass and an inductor paralleling the series pass branch to obtain the lower frequency side, notch.

This filter was transparent at the station’s opera-ting frequency and completely solved the problem. The station was “up” and running at full power with no indicated VSWR.

And, yes, a short time later, something more appropriate was built and installed for long-term use at that site.

Burt Weiner Associates has been serving the Los Angeles broadcast community for many years. His web page is: www.biwa.cc