[April 2013] This is the first in a slightly different sort of series: a discussion of how danger points, major problems, code violations, or other issue were resolved with a plan and minimal cost. First up: a solution for an electrical code violation.

In the past, I have enjoyed the BDR feature, The Worst I’ve Ever Seen! Further, I have submitted several of the pictures that I have seen in my travels.

But recently, it occurred to me that we could do more than just show horror pictures.

What if we also showed what was done to rectify such situations? That seems like a good way for those of us who “have been there” to help others.

A Not So High Voltage Idea

At an undisclosed location, someone mounted tower light current-monitoring transformers in a way that is not described in any electrical code book I have ever seen.

As you look at the picture, these transformers are on the lower right side. 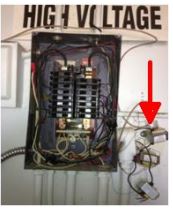 It is not clear what high voltage there was present at the breaker box, but it is quite likely that this wiring would not pass any electrical inspection.

It was my task to correct this situation.

The first step was to mount the transformers in an approved electrical enclosure.

Then, with the wires properly in conduit, I was able to re-install the breaker box cover and the elbow cap – initially removed so the wires for the tower light breakers could be attached to the hanging transformers.

On the left side of this picture, you can see the box where the transformers were mounted. 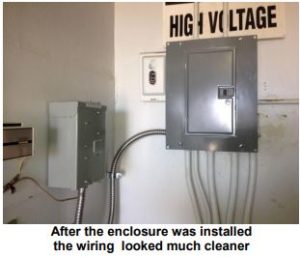 At the far left, you can also notice the low voltage sample lines leading to the remote control system.

Whenever possible, it is always a good idea to properly treat exposed wires, especially those carrying voltage or current.

Not only can the insulation crack, but just normal movement could jostle the wires, causing them to either go open or short to something else in the room.

Do you have a picture or two and a story about resolving a similar problem? Please click here and send it in – share it with everyone!

A broadcast engineer with experience from small to major markets, Richard Rudman is a regular contributor to the BDR and is the owner of Remote Possibilities in Santa Paula, CA.