[April 2013] Although IP connections often solve problems with program backhauls from remote sites, they may not be available. With ISDN being phased out in many areas, stations are finding it more difficult to use terrestrial RF links. Telos appears to have a solution.

The innovative Telos Lunar Zephyr enables convenient, two-way, broadcast-quality audio between studios and remote locations whenever both have a clear view of the moon.

The Lunar Zephyr will be available for delivery after the 2013 NAB Show. In an exciting program, existing Zephyr owners can utilize a software/firmware upgrade (with or without Telos’ optional hardware kit) to bring their existing units up to operating with the new Lunar standard.

According to Kirk Harnack, Telos VP/Executive Director, “The Lunar Zephyr is a great for doing live remotes. We expect this to be very popular with Telos Zephyr and Z/IP ONE users, who have come to appreciate Telos’ reputation for great audio quality from far-away places.”

Harnack says, “It includes a high-power data modem and a quantum-phased parabolic antenna. Where you would have settled for a mobile phone call, now you can have a Zephyr-quality remote instead. And it doesn’t need Wi-Fi, 3G, 4G, or any kind of Internet connection. There are no monthly data plans or expensive data roaming charges.”

Instead of having to deal with the phone company or local ISPs, Harnack notes “The Lunar Zephyr uses the biggest, near-Earth relay satellite in the sky – the moon!”

Each Telos Lunar Zephyr includes an awardwinning Telos audio codec, a rugged, roadtested, high-power data modem, an advancedtechnology quantum-phased dish antenna, and a selection of carbide-tipped groundstakes for securing it.

It so easy to set up, a child could do it.

“Other remote-broadcast antennas can be difficult to aim properly, but the Telos Lunar Zephyr is different,” says Greg Shay, Chief Science Officer for The Telos Alliance. “You simply point our quantum-phased parabolic reflector at the moon. It really couldn’t be simpler.” 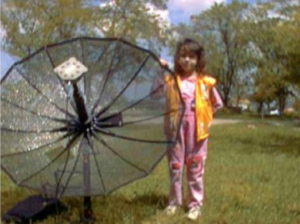 Gigi Grzndzk-Fnortner shows off the Lunar Zephy transmission dish. Shaw does point out that “our high-powered data modem does require commercial power. For a good signal fade-margin we’re recommending the modem be plugged into a 240 volt, 100 ampere circuit. While this may seem like a lot of power, you’ll be assured of a great audio connection , at least until the moon sets.”

Harnack notes that the Telos R&D Department already is working on a sun-bounce upgrade kit, for longer connection periods. He says, “We hope to announce the Solar Zephyr Upgrade Kit about this time next year, just before NAB.”

Clark Novak, Marketing Manager for Telos Systems did admit, under questioning, that the best results achieved during a full moon: “Bouncing off a quarter moon may cut your bandwidth down to 5 kHz,” he said.

Telos Systems is a dedicated, hardworking collection of broadcast professionals headquartered in Cleveland, Ohio, who are not usually given to frivolity, except on April Fool’s Day, or the rest of the year. For more or less information visit their website.