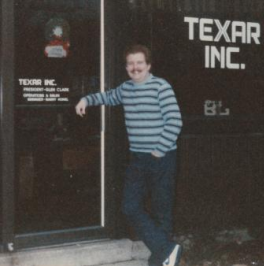 [September 2017] EMPs are not magic nor death rays. They are physical forces and can be understood by physics and their impact can be minimized. Glen Clark carries on with Part 2 of his series on EMPs, and what you need to know.

The purpose of this series is to present steps which may be taken, both before and after an EMP, to understand the challenge to minimize the disruption to normal operations of a radio broadcast facility.

Obviously, there is nothing a broadcast owner or engineer can do to change the pulse itself. So this article will not address fission, fusion, isotopes or how the pulse is created.

This brief discussion of what happens in the sky is included only because it may be helpful in predicting when an adversary may be more likely or less likely to employ an EMP.

The sub-systems we want to consider are:

The lift vehicle is what we would normally call “the rocket.” It consists of the internal gridwork of girders that gives the missile its structural strength, the “skins” which protect the rocket internals from the environment, the fuel tanks and the rocket engines.

The guidance system makes whatever in-flight course corrections are needed to make the weapon arrive at the designated target location.

Because there is significant doubt whether the GPS grid will be operational in the event of a “hot war,” the guidance system does not rely on external radio signals. Inertial systems are the norm.

Instead, for decades, inertial has meant multi-axis gyroscopes. A large number of gyroscopes were made by Sperry near Boston. An exaggerated image of this kind of early gyroscope is shown in several scenes of the Eddie Murphy movie Best Defense.

The re-entry system is more commonly called “the heat shield.” It is the thing that keeps the payload from burning up on re-entry. If one wanted to learn more with a search engine, the best word pair to search on would probably be “ablative shield.” Much of the science behind the ablative shield designs used by the US was developed by Simon Ramo (a PhD from Cal Tech). He is also the “R” in “TRW.”

The “physics package” is weapons-designer lingo for the payload that goes bang at the end of the trip.

So exactly what happens when a weapon approaches the target?

Setting Off an EMP

First of all, the detonator can be set for an “air burst,” a “ground burst,” or an “outside-the-atmosphere burst.”

If you are attacking a small but incredibly hardened target, a “bunker,” you would program the weapon for a ground burst. This transmits the maximum value of energy to a small spot. But it also throws tons of radioactive dirt into the atmosphere, some of which will finally fall back to earth on the other side of the planet. A ground burst leaves a large crater. A ground burst is an ugly thing which even the doomsday planners try to avoid.

Both Fat Man and Little Boy were air-burst detonations. Just like a taller FM radio tower will send the radio signal over a broader area, an airburst provides a better “look angle” for the energy leaving the warhead. If there can be any silver lining when a weapon goes off, it is this. The kinetic energy is directed downward and the amount of fallout generated with an air-burst is significantly less than with a ground-burst.

Basic Summary of an EMP

Distilling everything said since the beginning of this article, it is this:

“If you wish to deliver a nuclear explosion which will do damage with fast neutrons and/ or a kinetic energy shock wave, you need to get through the atmosphere. You will need all four of the subsystems enumerated above. However, the detonation height for an EMP is above the atmosphere. No ablative shield re-entry system is required. Only three physics problems need to be solved.”

Said slightly differently, if you have mastered three of four technologies but are still struggling with the re-entry technology, you cannot yet use the weapon in kinetic damage mode but you could use it immediately in EMP mode.

Does this make a hostile actor more likely to launch an EMP just because it is available immediately?
Perhaps.

An EMP can cause unimaginable damage, but not in the way that the popular media suggests.

The popular conception is that EMPs are some kind of irresistible magic. EMPs can do long-lasting damage on a wide scale. But they are not magic.

As is often the case, the popular media has created a public perception which is some distance from reality. Visual images are very powerful, even if they are not based in fact.

To a generation of grade school fans of the black-and-white cowboy TV show Hopalong Cassidy, a revolver pistol was a magic instrument which, when fired at another cowboy, caused the second cowboy to instantly fall over dead, leaving no marks on the corpse and no pool of blood on the ground. TV network censors have loosened what is acceptable today. And the ugly reality is common knowledge.

More recently, there have been several feature length movies which show long lines of cars, parked on the side of the highway, which have been immobilized by a recent EMP. This may be realistic. But the suggestion that every single device with a wire in it will die is beyond the facts.

EMPs are not magic or mysterious. They are simply electromagnetic waves of extremely high amplitude and extremely short duration.

It turns out that a pulse duration approaching zero results in a bandwidth approaching infinity. A reasonable first approximation is to think of a lightning bolt that is 100 time as strong but 100 times as brief.

The heart of any integrated circuit is a tiny “chip” of doped semiconductor, most commonly silicon. The chips are extremely fragile. So it is important to not apply mechanical pressure to the chip which would cause it to shatter.

At the same time, it is necessary to bring many signals to and from the chip. The “bond wires,” which carry signals from the outside world to the chip and vice versa, are usually thinner than a human hair and are made of gold, a soft metal with very low stiffness.

Using thin wire solves one problem while creating another. The thin wires are fusible links to lightning surges and EMPs. One or more bond wires will “open” if more than a few milliAmps flow through it. 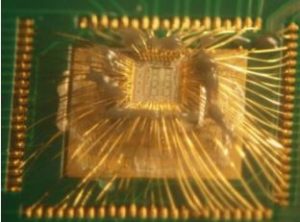 In the event of an EMP, millions of bond wires like the ones in the above photo will open, disabling Point-Of-Sale terminals, gas pumps, traffic lights, first-responder radios, SCADA networks, hard drives and engine computers on cars, trucks and tractors.

Unfortunately, such computer modeling does not work so well for models of EMPs

The model builders, Accuweather, The National Weather Service, the NCAR (National Center For Atmospheric Research) and others all used the same methodology when building their models.

Each started with a simple model and compared the prediction created by that model to the weather which was observed several days later. Tweaks were made to the models.

However, this iterative refinement methodology is not available to create accurate predictions for the impact of an EMP.

The only way to generate real-world data to compare the model predictions against is to set off an EMP.
It might be possible to find a remote atoll where an EMP could be created overhead without wiping out infrastructure in populated areas. But there are additional problems with using at iterative improvement process.

The best that the defender can do is to ask what choices he would make if the positions were reversed.

Will a model ABC123 smart phone survive an EMP at a given location?

Every MegaHertz of spectrum will have some energy in it from an EMP. Predicting the total energy arriving at a distant location requires modeling the propagation efficiency for every frequency. Then the modeler will add up all of the voltages from all of the frequencies to obtain the peak Voltage applied to the victim device.

The Most Common Answer: Maybe

Due to this infinitely large number of parameters which determine the strength of the Voltage imposed on any distant electronic device, it is computationally prohibitive to predict, with precision greater than the nearest order of magnitude the level of stress which any particular piece of equipment will be forced to endure.

Thus, the answer to so many questions is “maybe.”

That is not an answer that we like. But it is, for many questions, the best that can be done at present. 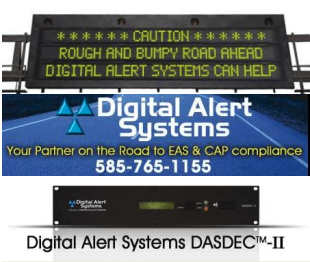 The ways that an EMP will impact our lifestyles and the operation of radio stations are multiple.

Yet almost all of them grow from three specific physics phenomena which can bring society to its knees. Not one of them is rocket science:

If there are three lines from this article that you wish to engrave in a chunk of granite to sit on your desk, those three lines would be the best choice.

Everything from here on out sits on top of one of those three phenomena.

Our next article in the series will discuss each of them, and what broadcasters can – and cannot – do to prepare for possible implementation.

Part 1 – The EMP Will Be Worst Than You Think

Part 4 – Making Sure You Are Ready For an EMP

The late Glen Clark was the founder of TEXAR and the designer of the AUDIO PRISM. He was also the chief scientist for kiprosys.com.