[July 2015] We all have that moment where we think “If only there was something to solve this problem.” For instance, more than a few of us have wished for a solution to the blending problem in HD audio. Inovonics has responded. Jim Wood explains the process.

Over the past dozen years or so, HD Radio has been installed at many stations. The digital signal has improved reception in many areas of difficult terrain.

But one major problem has persisted since the inception of HD Radio: Echo, stuttering, and lost words accompany the analog/digital crossfade on many stations, annoying the listeners.

Many engineers spend countless hours trying to synchronize HD audio for a clean transition, only to find delays creeping back in. Curing this problem has been a major goal for HD stations.

During the past year, manufacturers finally have developed successful solutions to keep the audio streams locked. One of the manufacturers which heard the call expressed by HD radio broadcasters for a solution was Inovonics.

Following the 2014 NAB Show, Inovonics began development of what was to become their JUSTIN 808 HD Delay Processor, a one-box solution for keeping analog FM and the digital HD1 programs in perfect sync.

Solving the problem was no easy task.

No time code is sent as part of the HD Radio signal. Hence, the audio path, processing, and transmitter exciters can cause the timing relationship between channels to wander quite a bit.

To keep the audio in sync, the JUSTIN 808 is inserted as part of the AES audio processing chain. 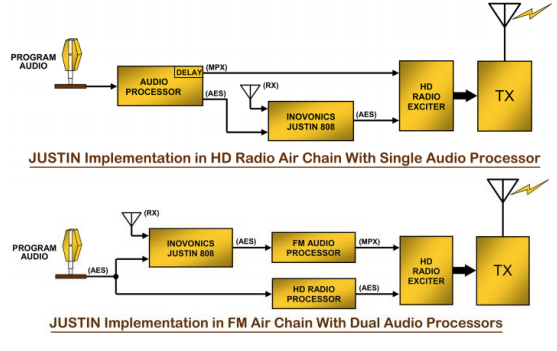 It then “listens” to the analog FM and the digital HD1 program material, both music and speech, and determines the exact time offset between the program paths using high-powered auto-correlation algorithms. The AES audio delay is then increased or decreased as necessary to provide a smooth blending transition.

Heavy audio processing, often including separate airchains for FM and HD1, can make this an even more difficult job.

Listeners to the complete HD Radio transmission setup in the Inovonics booth could watch and hear the JUSTIN 808 correlate and correct any timing errors – whether by a “time slip” for whatever reason in the HD1 airchain or from a purposely introduced deviation into the FM “diversity delay.”

Based on what they saw at NAB, representatives from several major radio groups took immediate interest.

This positive reception at the show led to the first pilot run of the product; initially, 60-day deliveries were quoted at the show.

In very short order, seven “beta” units were placed on-air in different parts of the country. The beta testers reported back that all seven units worked flawlessly in maintaining time and level alignment between FM and HD1.

We were quite pleased with the reception and the field reports, and it looked as if there would be a ready market for the JUSTIN 808 Delay Processor. But – and there is always one of those, is there not? – the testers, as pleased as they were, wanted more!

From Demo to Production

These hands-on HD Radio experts all had ideas for features that were not included in the original design.

For that reason, before the JUSTIN 808 was put into full production, Inovonics engineers made on-site visits with a good number of veteran engineers at HD Radio installations in several markets.

These visits resulted in major firmware and software updates, plus changes to both the PC board and chassis (ouch!).

Among the valid suggestions we received were ways to beef-up the Web user interface, adding expanded logs for error history and trends, full SNMP support (integrating alarms and control with other equipment), and selective alarm dispatch to smart phones.

This process did cause a slight setback for our planned rollout, but when guys with these credentials and connections say “frog,” you really do want to jump.

Redesigns of the JUSTIN 808 were expedited (reports of the use of a cattle-prodder are greatly exaggerated) and the final new production run was underway in record time.

Delivery of new units will begin by the time this appears in print.

– – –
For more information and specifications, click here for the JUSTIN 808 page.

Jim Wood the Founder of Inovonics, Inc., been designing and building solutions for broadcasters for over 40 years. You can contact Jim at: jim@inovonicsbroadcast.com