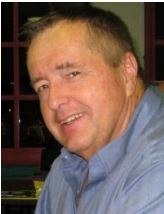 [March 2011] Getting clean, clear audio from a marginal signal can be tricky. Robert Reymont reports on how a tuner introduced last year solved a difficult reception problem.

Recently I had the opportunity to install a BW Broadcast RBRX1 FM tuner. It has turned out to be the solution I have been seeking for a long time.

For years I had problems getting a clean usable signal to feed a translator on South Mountain in Phoenix, AZ, the home for a full slate of full power FM and TV stations. With all that RF, trying to pick up a Class C-1 station more than 60 miles away in order to provide a signal for a 10 Watt translator was extremely difficult.

Even though the tuner we were using was equipped with a band-pass filter and notch filters for the adjacent stations, their signals still desensed the tuner, making reception of the desired signal difficult.

In fact, due to reduced power of the main inbound signal, at times the reception fell below the noise floor causing the receiver to mute.

The RBRX1 uses several techniques to improve reception. It employs an image cancelling, high dynamic range front-end mixing system for an on-channel IF conversion. Working together with a digital signal processed steep IF band filtering, the RBRX1 achieves the excellent adjacent channel filtering that makes this tuner an ideal reception tuner for distant FM signals.

The BW Broadcast tuner proved its mettle immediately upon installation – the required distant station was pulled in cleanly, and passed on solidly to the translator via the composite output.

Navigating the menu was easy, using the touch sensitive “wheel” with the enter and exit keys. Text input is available for setting call letters. Saving the setting is also easy.

The backplane of the RBRX1 has provisions analog, digital, and two multiplex outputs. There are analog, digital, and USB inputs for audio playback in the case the main feed should fail. RJ45 Ethernet and RS-232/GPIO connections are provided for remote control and configuration via a web browser interface that will work even on smartphones.

In the case where the tuner is to be used for critical monitoring in the studio, there is a sister model, the RX1, without the multiplex outputs.

In conclusion, this receiver filled the bill for a top of the line monitor relay receiver for a translator in a congested signal area. 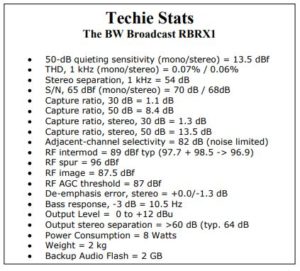 Robert Reymont is president of Double R Consulting in Mesa, AZ. His email is robert@reymont.com