[March 2011] Unfortunately, virtually every government and service is under monetary pressure these days, The BBC World Service is no exception and, like many similar organizations around the world, is cutting back on their overseas transmissions.

For many years, the BBC has sent a strong signal from Orfordness, Suffolk, UK (NE of Ipswitch). The signal on 648 kHz was mostly used for the English-language programs for the BBC’s World Service.

In fact, during the mid-1970s, when I was living in Spain, it was the booming signal on 648 kHz that was my lifeline to the English-speaking world. Launched from the marshes at Orfordness, even during the day, the signal could be heard over a huge area.

Sadly, as the British say, the 648 kHz system is now “closing down” for good. The transmitter will be turned off as of Sunday, March 27, 2011. Some reports indicate another broadcaster will take over the channel, but with quite different programming. 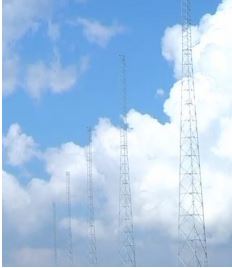 The Orfordness site was constructed in the early 1970s for experimentation and, later, to replace the famous site at Crowborough, a large and “secure” facility for broadcasting to Europe, especially during World War II, when the “sister” to the WLW 500 kW transmitter – called Aspidistra – was installed.

In recent years, the World Service programs on 648 operated into a five-tower directional array (it was originally designed as a six-tower array) to place a huge signal over Europe, with a broad beam (and peak radiation) at 132 degrees.

Jonathan Marks has made a video of a site tour he made in 2003.

In addition to comments on the 500 kW transmitter that is ending its service, site manager Andy Matheson is interviewed about the various aspects of the Orfordness facility and some BBC history. It is about 17 minutes long.