[November 2018] One of the biggest sources of damage to broadcast stations is from static buildup and lightning strikes. It can be in the middle of Summer, during a cold, dry, period in Winter, or anytime humidity drops low. Thus, any time is a good time to plan.

After all, putting a tall metal stick into the air is just asking for trouble, isn’t it? Are there any real solutions? David Rose discusses why static dissipators work to prevent downtime.

When the subject of static dissipators comes up, it often sparks an intense discussion.

Some engineers strongly aver that installing dissipators has saved their stations from even severe storms. Others just “know” that it is urban myth. In between are those that would like more information and, if possible, proof of the concept.

Looking For a Solution

In 1985 I began research on manufacturing an inexpensive dissipator device for radio towers.

At the time I was a contract engineer for a number of stations in the Southwest that were experiencing lightning damage – a real-world laboratory where I felt results could be well documented.

The reason for this somewhat amazing display is that your hair strands are acting as dissipator points, discharging the ball on the generator. It does not take a lot of hair strands to show how this works; even follicly-challenged guys can touch the ball without danger.

By rearranging things a bit, another demonstration will display the actual ion flow from the Van de Graaff generator. This time, instead of a blunt connection (the hand), a fine point is attached to the ball. sciencefirst.com Ion wind

You clearly can see the effect of the ion stream on the candle’s flame. 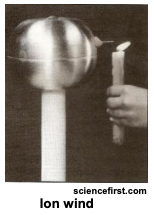 Furthermore, if you hold your hand near to the point you can feel the stream of ions discharging the ball. Even one fine point will discharge the ball rendering it neutral so no arc discharges are produced to a ground nearby.

This is very impressive and convinces most that dissipators are not black magic.

Dissipators have been standard equipment on airplanes for many years.

At first, airplanes were charging up like the ball atop the Van de Graaff generator – which actually caused them to attract lightning. The plane became the catalyst connecting the streamer coming from the ground up and the cloud down to complete the circuit.

However, by adding wire dissipators, or static wicks, to the trailing edges of the wing bled the charge back into the atmosphere. 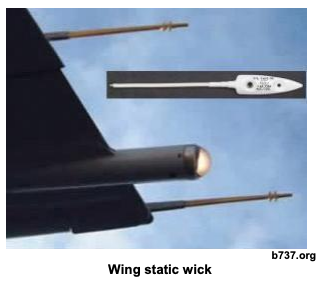 This arrangement also solved the radio interference problem with High Frequency and the Automatic Directional Finder services on the plane.

Towers act the same way during a thunderstorm or in winds and need to be neutralized. Static dissipators on AM towers will help the static drain choke prevent arc-overs at the base insulator ball gap, which can pull the carrier to ground causing the transmitter to cycle off and back on.

My first device was a six-inch square by ¼-inch stainless steel plate with ¼-inch pointed rods epoxied on one side.

Unfortunately, this unit was very hard to build because cutting the stainless plate required some heavy equipment. Over time, I changed to a punched 1/8th -inch plate with 1/8th -inch holes and two sixteenthinch stainless rods in each hole.

Each rod was then sharpened using a special spinning and grinding arrangement. These were four inches long and centered through the plate and welded. Since the plate became hot during welding, a special jig was built and clamped to it, to prevent warping.

This produced about 500 very sharp indestructible points on both sides of the plate.

In 2000 the mounting bracket was updated from hose-clamps to stainless steel angle-bar with stainless U-bolts and ½-inch stainless all-thread. Many of these dissipators now have been on towers more than ten years and are showing no signs of wear.

The results have been dramatic. Many stations that had suffered regular damage no longer failed due to static or lighting strikes.

The static dissipator is only one of the many techniques that you should utilize to protect your valuable equipment and prevent off- air time. Here are some of the other things that ought to be in place:

1. A lightning rod to protect the beacon and dissipator if a strike still occurs.

2. A star-ground system at the base of the tower using a bentonite or chem-rod ground.

3. Number 6 or larger copper wire from the top of the tower to base ground to overcome any resistance in the connections between tower sections.

4. All transmission lines should be grounded to tower at least every ten feet.

5. All transmission lines should be tied to the ground at the base of the tower.

6. All transmission lines should be grounded at the entry point to building.

7. All transmission lines should use surge protectors inside the entry point of the building.

8. Power conditioning should use a large surge protector at the breaker box and MOV’s at each piece of equipment.

9. All equipment should be connected via UPS backups with surge protection.

10. Telephone lines should use a twistedpair surge protector.

11. AM tower should have static drain chokes and a properly set ball gap. It is worth reviewing Phil Alexander’s discussion on ball gaps here.

By careful construction and wiring, you can reduce or prevent damage from static and lightning at your stations.

David Rose is an experienced Contract Engineer and Tower Rigger based in Ashland, OR. Contact him at davidrose55@yahoo.com