Rats! The Transmitter with the Inconveniently Shorted Wire

[August 2013] The days are long gone when station engineers were tasked with the regular duty of cleaning and waxing the transmitter.

It is always nice to have a nice clean transmitter in a nice, clean, air-conditioned room, right?

Unfortunately, that is not always reality. Engineers often are more firemen than anything else. Applying wax to the face of the transmitter now seems more like a scene out of a 1940’s movie.

So how about opening the transmitter room door to see something like this? 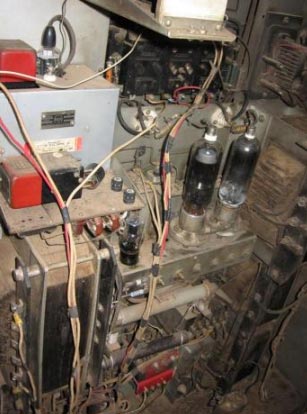 OK. Let us acknowledge that not all stations even have a regular engineer these days. Dust and other things “happen.” 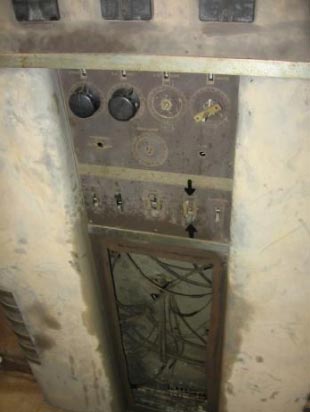 Why are we sharing these pictures? Some of you may recognize that this transmitter model does not normally have a hole in the front as shown.

Want to know the “rest of the story?”

According to the story, a rat came into the room and started to eat its way through the insulation.

Eventually, enough insulation was chewed on the High Voltage transformer leads that there was a short.

The location of the short was rather difficult to get to, as you can see from the picture of the backside of the transmitter. The engineer who was called found his only solution to be cutting a hole in the front of the transmitter.

The engineers on the job literally flipped a coin to determine if they were going to repair this one or tell the owner “it is time.” Twice it came up “repair one more time.”

Of course, transmitters of that age were not made of tin. It took six blades to get through the panel, with enough room to make the repairs.

The transmitter now is back on the air – at least for the time being.

Still, it is probably not worth cleaning and waxing, is it? Most engineers do not have the time nor manpower to do the level of maintenance they would like. More to the point, many transmitters of similar age were built well, but now the wires are so brittle that just moving them causes the outer layer to fall off in pieces.

Should such a transmitter be repaired ad-infinitum? Or is there a point when the ROI (Return on Investment) has reached its reasonable limit?

Perhaps you have a picture of a transmitter that makes this one look “plush.” Share it, please!

It is not our intention to embarrass anyone but to realize that doing everything perfectly is not always possible. Nevertheless, after we chuckle a bit, it does remind us to check out our own facilities.