Minneapolis Reaches For The Sky

[June 2015] In the early days of FM and TV, the antenna was usually hung from the AM tower. Eventually, stations wanted taller antennas to improve reception and in Minneapolis (and neighboring Saint Paul) the answer was growing tower farms. But, as Steve Brown relates, getting there took some time and effort.

The story of the transmitting platforms for FM broadcasting in the Minneapolis-St Paul, Minnesota radio market have taken the usual twists and turns over time.

But some of the most interesting parts of those changes happened during my broadcast engineering career. This series is my way of sharing the experience with you.

FM and TV Get Started

Minneapolis is located in “Class C Country,” which allowed that class of FM station a maximum radiated power of 100 kW at 2,000 feet above average terrain. However, at the time, that was not practical. Most stations operated off of AM towers or relatively short buildings – gener-ally 300-500 feet AAT (above average terrain).

The Need for Height

The early 1970’s saw great growth of FM receivers in homes and cars. With that came more listeners which, in turn, begat more listener complaints about sketchy FM reception.

Local television stations also were interested in higher transmission platforms as a way of reaching a greater audience and overcoming obstructions from taller neighboring buildings being constructed or planned. This was especially true in downtown Minneapolis, where most FM and TV transmitters were located.

In some cities, the solution was easy – a convenient mountain or skyscraper building (like the Empire State Building in NYC). On the prairie, it was not so simple.

Dancing With the Airport

Finding locations to place really tall towers was difficult, even in the 1960s.

Due to the natural barriers of the Mississippi and Minnesota rivers, the predecessor to our regional planning commission proposed moving the major airport in the Twin Cities from southeast of downtown Minneapolis to a new location north of the metropolitan area. This led to most stations in the market giving attention to population growth in the northeast, either siting towers or orienting AM directionals to serve the area.

In the end, the airport was not moved – to the dismay of the AM stations – but the focus on the North did lead to benefits for FM and TV’s.

The first solution to the height problem came in 1971 from three local television stations, which planned to construct a tall (1300 feet) candelabra tower in the northeast suburb of Shoreview, Minnesota.

Unfortunately, the tower collapsed before regular TV (or FM) broadcasting could commence. We were told the City of Shoreview then mandated replacing the failed tower with two towers, 100 feet apart. Supposedly, the thinking was that if one fell, the other would survive. However, to engineers it seemed clear that because of the way their guy cables are so interwoven, it is unlikely only one would go down in a disaster.

In any event, with multiple towers rising, as on fertile farmland, the site became known as the Telefarm. The site was not high enough to max out 100 kW at 2000 feet allocations, the site average of approximately 1300 feet HAAT gave them a clear advantage in coverage compared to the other stations.

Meanwhile, two of the TV operators put their co-owned FM antennas on the tower: KSTP-FM 94.5 MHz and WCCO-FM 102.9 MHz. The third partner in the Telefarm group leased its spot to Minnesota Public Radio for its non-commercial FM operation KSJN 91.1 MHz.

When FM Was the Poor Stepchild

It was the television CE’s who called the shots on the construction of the Telefarm towers and antennas.

Because FM was just an afterthought to them at the time, both WCCO-FM and KSTP-FM were located at the same height but on different legs of the North tower, each with 14-bay antennas and RCA BTF20 transmitters. Apparently no thought was given to electromagnetic coupling between antennas.

Thus, it was soon discovered the mounting of the KSTP-FM antenna on the Northeast leg of the tower caused a huge null to fall over Minneapolis (and probably also caused an increase in the apparent reflected power on the WCCO-FM transmitter!). Eventually, an agreement was formalized whereby KSTP removed both FM antennas, purchased a new 8-bay antenna for each station, with WCCO-FM mounted above the KSTP-FM antenna, plus purchased another RCA transmitter and equipment for themselves and WCCO-FM to be able to combine the original transmitters to meet the required power of 34 kW TPO (Transmitter Power Output).

Fast forwarding to sometime in the 1980’s Mark Durenberger noticed all those used 14-bay RCA antenna elements (28 of ’em in radomes!) stored in the KSTP-TV basement and put them up for sale. Somehow our CEO saw the ad and frantically called me, trying to convince me that Mr. Durenberger was trying to sell our existing an-tenna right off the tower!

Another Tall Tower
Reaches Into the Sky

The Fox television station (KMSP-TV, Channel 9) elected to construct its own 1,460-foot tower in about a mile east of the Telefarm in Shoreview.

Completed in 1971, the tower was initially the home of just KMSP.

Although no FM stations were included in the original plan at Shoreview, the Shoreview Group Antenna later became the site for an FM Master antenna, a three-around panel antenna, which now provides much more even coverage of the area for the 9 FM stations multiplexed there, as well as a stand-alone FM and four TV stations.

But it took a while for them all to get there.

Once the original stations moved to the Telefarm, the other 6 or 7 FM stations started making numerous requests from 1974 onward to move to either of the Telefarm or Shoreview sites.

Nevertheless, at the time all those proposals went unheeded by the tower owners.
In the late 1970’s, four of the stations (eventually five) banded together to erect
antennae on the IDS building in downtown Minneapolis, which was the tallest building west of the Mississippi at the time. This gave the stations an increase in height to about 820 feet.

Construction at IDS lasted until the fall of 1979, when testing began. 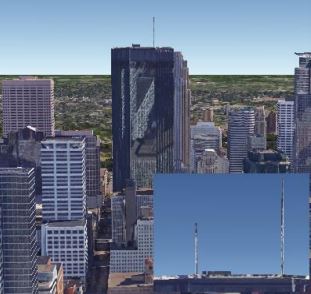 Trouble In the Air!

On one of the first Sunday nights when they lit up the IDS antennas on a test basis I was driving to downtown Minneapolis in my 1974 Volkswagen Super Beetle, after some off-air maintenance of my transmitter in Shoreview.

As I neared downtown Minneapolis on Interstate 35, I was listening to my station, WCCO-FM (102.9 MHz). The stock radio in the Beetle went absolutely nuts and I immediately turned around, then headed back to Shoreview, convinced that our transmitter had a serious problem. Of course, the problem went away as I drove north.

The next day the problem seemed to have gone away completely – as they had finished their testing.

It All Happens At Once

Not too long after that night, in early October, 1979, three major things happened in my life as a broadcast technician at WCCO-FM:

The end result for October, 1979: WCCO-FM was unlistenable off-air in downtown Minneapolis. With the techs on strike there was no one there to help figure things out.

Eventually the strike ended, and it was time to solve the interference issue.

In the next part of this series, we will discuss the time and effort that went into seeking a solution for the problems that stood in our way, and how the engineering community in Minneapolis-St. Paul came together to resolve the problem. It is a story of engineers, consultants, lawyers, and – surprise! – a lot of money.

Steve Brown, aka the Radio Ranger, is one of two people with the same name in the Midwestern United Sates who practices the fine art of broadcast engineering. (“The Other Steve Brown” lives and works in Appleton, WI.) They are still frequently confused with each other, which is a compliment to both. Now retired from WCCO-FM, Brown enjoys back-packing in the Land of 10,000 Lakes. He has agreed to share his memories as part of a series that tells how FM stations in Minneapolis-St. Paul learned to im-prove their facilities and maximize coverage.

You can email Steve at:
radioranger@comcast.net