Why I Love Those Versatile 555 Chips

[June 2015] We all have favorite “go-to” solutions for the problems that crop up from time to time in any broadcast facility. Even after four decades, David Rose still finds 555 chips to be his friend.

Back in 1976, when I started in broadcasting, the little 555 timer chip was already proving to be a great little device. And over the years it has continued to be useful in many of the circuits I used to solve problems in the studio and at the transmitter site.

Clocks and counters have always been a big deal in broadcasting.

Back in the late seventies, equipment was starting to use LED readouts as well as timing IC’s for counter circuits. The 555 was great to use as the pulse generator for the logic circuits.

Thus, one of the first uses I found for the 555 was a ten-minute LED readout counter for cartridge and reel-to-reels machines. Generally, it was a pretty straightforward process. I would pick up some 555 project books at Radio Shack and find a useful circuit using the 555 as a pulse genera-tor. By adding TTL decade counter IC’s for the clock logic and driver IC’s to handle the current to the LED readouts, the circuit would come together quickly.

All I had to do was lay the parts out on a breadboard and install it in one of those mini-boxes you could get from Radio Shack or other supply houses. The readout was in the front, external connectors on the back, and parallel switches on the top. 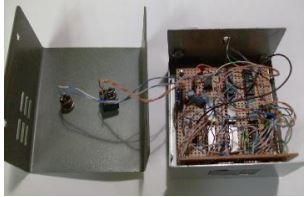 555’s are the heart of
timing and counting circuits

Eventually, I could knock these out in just a few hours.

After some success with this I moved ahead to more complicated designs.

News At the Right Time

The next project that came up where 555 chips were helpful was at one of those stations trying to mate network news with an automation system.

In those days (the late 1970s), trying to get an automation system to connect to a live network was always a big problem since there were no satellites, GPS, or even an Internet with which to sync things. Systems were always getting out of time and had to be adjusted. The use of “fill music” to make up the difference was cumbersome and got old very quick.

The solution was to use the network tones to record the news feeds, then play them back when the automation machine was ready. This meant decoding the touch-tones from the news network, timing down to a start pulse, and triggering a cart deck that would erase the cart as well as record the news feed each time.

I used phase-lock loop IC’s that could be used for the two frequencies as well as the digital shift registers for the delay. When the pulse fired it went to a driver transistor which started the deck.

But the heart of this very simple unit which does not require GPS or Internet was a 555 timer.

In time, other uses for the little 555 chip became apparent. They proved to be reliable – and inexpensive too.
For example, when a new MW5A transmitter was installed we found that it hated power failures. It would come back on but if the line was unstable it would continually try to come up. Rather than take the chance of stressing the transmitter something had to be done to delay the start-up. 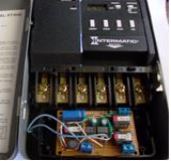 By using a circuit to sense the power off and back on – and then holding the high voltage off for 30 to 60 seconds – a stable transmitter restart occurred.

There was also a pushbutton override that could be used to bypass the timer.

Any time you need a single pulse to drive a relay – or convert a long pulse into a shorter one – the 555 is there to help.

I have also used the 555 as a single pulse generator to raise and lower power as well as shift towers for night and day. Along with a digital clock to keep time, the added pulse board would work to create a single pulse from a relay that was latched.

As I said, the more I used the 555, the more I liked it. The projects I built were solid and bullet proof, they always worked. You might even say they were overbuilt: I liked to use IC sockets so I would change out the chips when necessary – but I do not think I ever ended up having to do so.

I was always trying to think up new uses for the 555. Some of them just work.

Perhaps the circuit I have most frequently built, and use to this day, is a simple twenty-second computer power strip reset. I have built probably 50 of these over the years and installed them in power strips everywhere.

The problem first showed up at transmitter sites when computer and other equipment using logic circuits would lock up. This usually occurred when the power line bumped or went off and back on and the equipment did not go through a reset routine.

It was observed that when the computer failed to change power and/or tower phasing. Doing a reset prior to the scheduled time solved the problem. The same approach also would take care of STL systems that would lock up, usually at transmitter and translator sites that were inaccessible during the winter.

Usually all that was needed was a remote control connection to supply a manual momentary closure. This could be from a phone line, microwave link, or, in some cases, I have used the squelch relay to do the reset by turning the STL transmitter at the studio off and then back on. 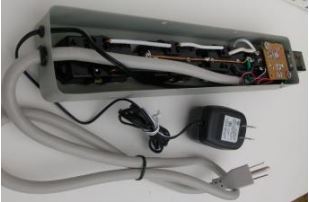 I have pretty much perfected this circuit and built it – using a small Radio Shack IC board for the one 555 and a 12 Volt DC relay and a metal outlet strip that has surge protection.

I really have enjoyed experimenting with these IC devices. In fact, I have lost track of how many times I have relied on this little chip to solve a big problem.

There have been all sorts of books written about this IC, as well as quite a few web pages, with many circuits that can be designed and used based on the 555. So the next time you need to solve a big problem, think about the little 555 and do some searching and experimenting. A quick search will likely find just what you need for your project.

David Rose is an experienced Contract Engineer and Tower Rigger based in Ashland, OR. Contact him at davidrose55@yahoo.com