In the last few years a new type of FM Pirate has emerged. Many stations licensed as (CH-6) Low Power TV’s have morphed into faux FM broadcast stations. Even more recently some “Legal Analysts” have suggested that these stations seem to be working within the FCC’s Rules.

I suggest that these “Legal Analysts,” and even the FCC themselves spend some time reading those Rules. While there are unintended loopholes in the Rules that are being conveniently used to allow this to continue, there are portions of the Rules and Regulations that are clearly being violated.

The frequency of 87.75 MHz is allocated for the aural carrier of television Channel 6, which I must interpret to mean that a signal on 87.75 MHz (offsets included) is licensed as the aural channel of a TV station and therefore must follow the TV Rules, which for aural modulation includes Class A and LPTV stations.

There has been convenient confusion leading to the belief that the aural TV signal may modulate up to 75 kHz deviation. This is partially correct, but clearly not with respect to the audio that falls in the range of 50 – 15000 Hz – the main channel by very clear FCC definition. This confusion arises because there is a misinterpretation of the Broadcast Television Sound (BTS) Rules.

The BTS Rules divide up the maximum allotted 73 kHz deviation in the following manner with the first being the big one:

1. The Main Channel Signal, the material within 50 to 15,000 Hz, may not deviate the TV aural carrier by more than +/-25 kHz under any circumstances. (Main channel deviation in excess of +/- 25 kHz is not compatible with any standard NTSC television receiver made on this planet.)

2. The 15.734 kHz Stereo Pilot injection may not deviate the TV aural carrier by more than 5 kHz.

3. The DBX encoded AM DSSC “stereo Channel” signal, the equivalent to FM’s L-R channel, injection may not deviate the TV aural carrier more than +/- 50 kHz. (NOTE: The L+R and L-R channels teeter-totter and are not both fully present at the same time and as a result their deviation allotments trade off.)

4. The FM Secondary Audio Program (SAP) channel injection may not deviate the TV aural carrier by more than 15 kHz.

5. The FM Pro Channel injection may not deviate the aural carrier by more than 3 kHz.

Under maximum stereo conditions these add up to a maximum of 73 kHz deviation of the aural sound carrier. These allocations may not be divided differently and except for the L-R channel as noted above, trading one allotted amount of deviation for another is not permitted.

While the Rules allow other stereo systems to be used, the main channel deviation limit of +/- 25 kHz must still be adhered to regardless of the system used. It is also interesting to note that there are no television receivers manufactured that decode the stereo system used by FM broadcast. 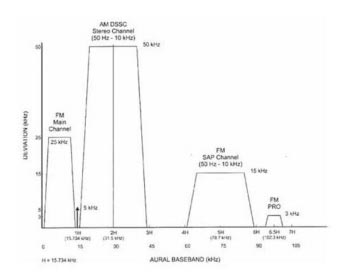 Right in the Rules

The aural signal requirements can be found in Part 73.682 and Part 73.681 of the FCC Rules and Regulations, which also hold true for Class A and LPTV stations in order to be compatible with existing analog NTSC television receivers.

(7) Multiplex subcarrier or stereophonic aural transmission systems must be capable of producing and must not exceed 25 kHz main channel deviation of the aural carrier.

Please note the term, “main channel,” and then go to definitions:

Main channel. The band of frequencies from 50 to 15,000 Hertz which frequency modulate the main aural carrier.

This is not FM Radio

The television aural baseband signal is allocated differently than FM broadcast’s baseband is allocated. For FM Broadcast the maximum deviation is +/- 75 kHz, with slight allowances for SCA injection. The pilot, and any other subcarriers, are subtracted from the maximum allowable +/- 75 kHz deviation. In television, the subcarrier/s injection is added to the main channel’s maximum allowable +/- 25 kHz deviation. So, when the TV aural main channel audio modulates to +/- 75 kHz, then this becomes 300 percent of the allowed modulation.

From my home in Glendale, California I can see a Channel 6 TV station that is deviating +/- 83 kHz with main channel audio, has a 19 kHz pilot, no L-R information and no SCA’s. That calculates out to about 332 percent main channel modulation. They promote themselves on the air and with bumper stickers as 87.7 FM.

I have personally measured another Southern California Channel 6 LPTV with no visual carrier clearly promoting itself as an FM Station complete with bumper stickers – and modulating their aural carrier 702 percent with main channel audio.

One last point: a standard television receiver cannot reproduce an aural only signal. If a “TV Station” does not transmit a visual carrier the audio is not recoverable on any standard television set manufactured in this country over the last 50+ years. Intercarrier NTSC television receivers require the visual carrier to provide the 4.5 MHz difference from the aural carrier in order to produce the necessary 4.5 MHz I.F. signal within the TV set for the sound system to work. This is the same way a traditional super-heterodyne receiver requires a local oscillator to produce the I.F. signal.

Now, if only the FCC would read their own Rules and Regulations and regulate based on the word as well as the intent of those Rules.

Burt Weiner is a longtime engineer in Los Angeles, CA. His email is biwa@att.net