You Cannot Fight the Storm

[August 2010] When a storm rolls through, most engineers instinctively reach to make sure their cell phone is on (in the old days, it was the pager, wasn’t it?) and put their day on “hold.” While making sure that the ground system is in good shape and power line protections, etc., are in place, the bottom line is that you just cannot predict what a storm will do. You can only wait and clean up.

In some cases, it is lightning or power outages that are the problem – it is quite common to notice the smell of burnt parts when you open the door to the transmitter room. Other times, the storm does the damage with its wind.

For example, tornadoes, hurricanes, and similar weather events can flatten towers, antennas, STL dishes, and even some buildings, depending upon the strength of the winds. Most puzzling, sometimes the damage seems selective – one dish may be destroyed, while an adjacent dish just keeps on working.

So Much for Saturday Night

Seth Welcker at the Pacific Radio Group in Hawaii got his call at 10:30 on a Saturday evening. A storm came though and the result was, well, not a fun evening. 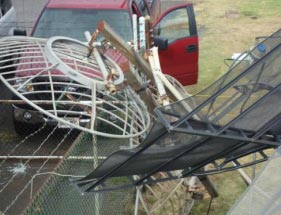 Welcker relates: “Basically there were two Mark dishes and a whip mounted on wooden cross members on top of a pole. Due to high winds the mounts worked themselves free falling through a paraflector, then through the satellite dish below all that.”

With the loss of the satellite receive dish, syndicated programming on two stations (one a talk station, the other ESPN sports), stopped abruptly. Welcker notes the STL dish for the ESPN station was still working, sending out the dead air, 25 miles to the transmitter site with no problem at all. 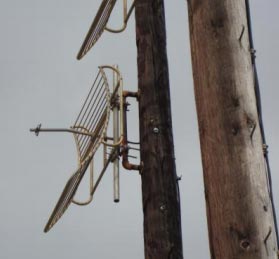 Two dishes remained attached to the poles but the ones that fell killed the satellite receive dish.

Curiously enough, one of the Mark dishes was feeding an AM station about eight miles away. Welcker was amazed to hear that despite some static, and the loss of the dish ripping “the inner out of the feed when it fell, just the transmission line and part of the inner [was left hanging] and it was still being picked up on the receive side. There was static as the wind would blow the cable past a pipe mount, still on the pole. Amazing how those things work.”

Viewed from another angle, not only is the damage visible, but we can see how close it was to where it might have hit someone.

At least the timing was good for the safety of the station personnel. As Welcker relates: “Luckily no one was around so there were no injuries, no damage to the building either, just equipment.”

Can we learn any lessons from this situation? Perhaps it is good to periodically review the condition of the STL and receive dishes used at a facility. Sometimes they can be strengthened, sometimes there is little that can be done, aside from making sure that if they break free, they will likely fall where
they will not do damage to buildings or people.