Hold The Bar-B-Cue – We Need a Knife Lock!

[July 2011] Sometimes keeping an older piece of equipment running takes ingenuity. Witness the way this transmitter was kept in service until a new one was installed.

Here is a picture that shows a rather unusual use of a steak knife. 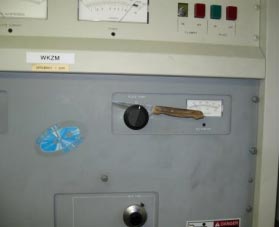 It was late one Tuesday night, according to our correspondent, when this solution was found to solve a problem.

Apparently this particular transmitter had been a problem for some time, with a long-standing reputation for not maintaining a stable output.

The problem was that the cabinet vibrations caused the plate tuning capacitor to move around and detune the PA.

At first, it was diagnosed as being caused by a poor electrical connection coming from worn out parts. So, normal maintenance practice seemed to suggest the smart thing was to replace the shaft and fingerstock.

We were told that this particular plate capacitor is manufactured with one single plate on each side. The rotor is a semicircle of silver-plated brass, connected to a shaft which supports the front panel knob. Then fingerstock was placed around the shaft to ground it.

After replacing the shaft and fingerstock, it seemed like a good idea to apply some conductive grease. Instead, the knob now turns “real easily,” which led to understanding the problem.

Clearly it was gravity that was the unexpected factor. Due to the way the tuning capacitor was mounted, the normal cabinet vibrations, along with gravity, was what pulled the rotor plate out of the desired position.

There is a new transmitter waiting for a new building, which is waiting on permitting.

Because of that, the correspondent suspects the knife will stay right there where it is until that transmitter is shut down in a few months.

Then the knife can come out and Bar-B-Cue time can resume.