Many structures have been used for AM antennas, from thousand-foot towers to those “classic” BlawKnox diamond-shaped towers to modest emergency wires strung to keep a station on the air. However, it is safe to say that none of those can adequately prepare you for this one.

Imagine you are driving across West Texas and see, in the distance, what appears to be a radio tower. As you get closer, you feel the need to blink a time or three. 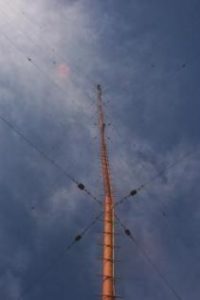 It does not take a surveyor’s transit to determine this stick is not quite plumb.

Yes, this is being used as an antenna for a real radio station. Joe Rother explains: “About 3 years ago my wife and I took a long drive back from Amarillo swinging to the east before we turned south to get back to our home at the time in Lubbock. When I saw this “tower” off to the side of the road, I couldn’t resist taking some pictures, because I knew I wouldn’t be able to describe it accurately.”

Getting closer to the structure, Rother understood why it looked as it did. “The “tower” appears to be made of six 30-foot oil drilling shafts that have been welded together, and foot pegs welded on for climbing.”

He continues: “The “tower” is guyed from four sides instead of three, with the guy levels appearing to be at each joint in the drill shafts. The base of the “tower” is suspended by what appears to be high tension power line insulators mounted from the “tower” to a triangular mount that has legs that go into the ground. 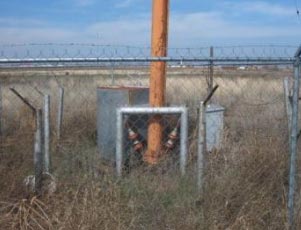 Perhaps this is not a typical tower installation. The ground, by the way, is level, the tower is not.

“The base of the “tower” is suspended in such a way that there is nothing but earth and grass directly below the “tower” itself. The “tower” appears to have once been lit, but when I saw it, it had no electrical power crossing the base insulator.” 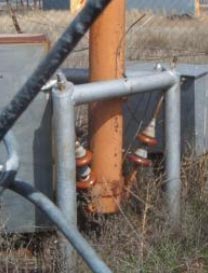 Apparently, this tower was supposed to be suspended with nothing under it at all.

At least, the station was probably free from citation for tower fence issues. Rother noted the chain link was in good condition, with one run of barbed wire at the top.

Nevertheless, it might be a bit difficult to find a tower rigger who would be pleased to climb this one!