Is that Terminal Positive or Negative?

Marvin Collins, former Chief Engineer of KFI, Los Angeles, shares this picture of two units of a popular battery, which brought about a baffling situation.

Collins notes: “Recently while working on a piece of battery-operated gear I was puzzled by the non-operation of the piece of equipment.”

Collins had been using clip leads to make temporary connections in the circuit, and simply followed the markings on the battery.

However, as he began troubleshooting and inspected the connections, “I noticed that the 9-Volt battery polarity was labeled in reverse. It took me a few seconds to believe what I was seeing.” Putting two batteries together made it obvious what had happened. 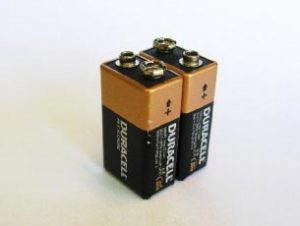 The battery was fine electrically. The problem was that the case and labeling were put on in reverse compared to normal. Once the terminals were connected “normally,” all was well, and the gear worked properly.

Collins was surprised: “I wonder how many of these batteries were manufactured and sold before the mistake was discovered.”