Dishing Out Some Unwelcome Visitors

Written by Michael Barnes Posted in Richard Haskey's: The Worst I've Ever Seen!.

[Satellite dishes have brought the world to radio stations. Does anyone remember the days of bicycling tapes? Combined with solid-state receivers, satellite systems seem to be as stable and maintenance-free as anything in the facility. But that may be deceptive, as this case shows.]

Michael Barnes has seen a lot over the years, the good, the bad, the ugly, the cliché. This may be one of those stories where the pictures really tell a bigger story than the words.

Barnes says: “I don’t do a lot of satellite work anymore. But I got a call from a desperate user who lost all satellite signal and needed help quickly, and no one else was available.” Arriving on scene, he went in to check out the receiver status, and quickly identified where the problem was located: “The receiver looked good, LNB voltage was good, but the coax read open.”

But Before We Can Fix That

Heading out to the dish, he took a peek up the feed horn, which revealed a second problem. 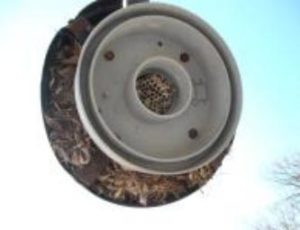 The feed horn has some visitors

Obviously, a wasp nest in the feed horn was not a good sign! A large wasp nest was even more troubling. At that point, the question arose, as Barnes put it, “How long have they been having reception problems?” But, then when he removing the cover, it definitely revealed more than he wanted to see. 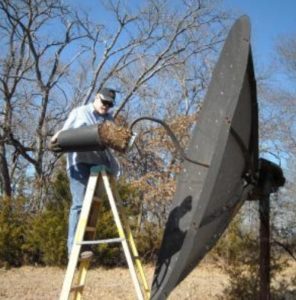 It was a full house

Barnes said, “I had no clue what I was going to find under the radome. Usually, I just pull it off. If anything comes swarming out, I can move surprisingly fast for an old fat guy.”

This close-up picture just sort of tells the whole story. 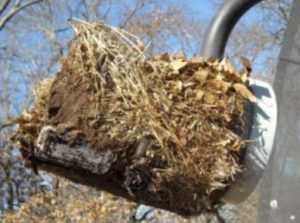 This time, fortunately, the nest in the feed horn appeared to be pretty inactive. Barnes used the hooked end of an electrician’s 12-foor “glow stick” to pull the nest from the feed horn. He notes: “I rarely spray. I haven’t been stung in years. The wasps don’t bother me all that much. Yellow jackets, on the other hand, are a completely different story.”

Back to the Coax

However, once the hive was cleared away, the original problem – the open coax – still remained. Now, the problem and solution was clearly seen. 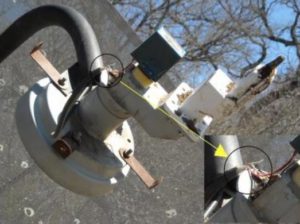 The coax had come loose from the connector

It was clearly a coax issue, with all the pressure inside the cover causing the coax to become loosened from the connector. A new connector was placed on the coax and as Barnes described it: “… all was well with the world.”

Yes, before leaving, Barnes did take the time to emphasize the importance of regular dish inspections.

Michael Barnes is the Technical Director for Salem Radio Network in Dallas, Texas. He also does occasional contract and consulting work. His email address is mbarnes@srnradio.com