Finding VSWR in All the Wrong Places

[October 2012] Mismatches in the transmission system can cause anything from minor bandwidth and distortion issues to completely shutting down the transmitter.

That is why most engineers keep an eye on the VSWR indications, and react quickly when they see any changes by checking out the entire system, starting with the transmitter tuning into the load.

Of course, the problem is not always located in the transmitter building. But the problem also may not be found where you might expect to find it – showing that widening out the system inspection may provide an unexpected solution.

The Problem Was Growing

Jim Stanley sent the following pictures, showing why, when VSWR or antenna matching problems surface at an AM site, it is a good idea to check the tower before doing anything else.

Recently he was called to an AM station where there apparently was a severe mismatch, as evidenced by a very high VSWR reading. 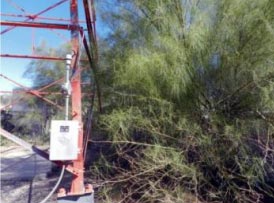 The base of this tower is no longer floating

Taking a look around the tower, it was quickly pretty clear where the problem was located.

As you can see, in this case, the adjacent shrubs, trees and weeds have grown into – and are making contact with – the tower. You might just see the transmitter building in the background. 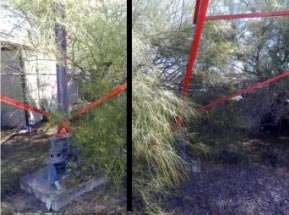 Obviously this problem had been ignored for quite some time and was only addressed when the reflectometer on the transmitter began to issue warnings.

After Stanley checked out the tower, he quickly ordered up the appropriate resources to solve the problem.

The calibrated test instruments that were required to resolve this consisted of a chainsaw, weed eater and a rake – and of course some elbow grease provided by a local gardener.

After the landscaper was finished with the vegetation around the tower, and Stanley had made improvements to the ground system, the result was a much calmer transmitter. RF output was up significantly.

And the site itself did not look half-bad either.

This last photograph was taken from the same perspective as the first one. 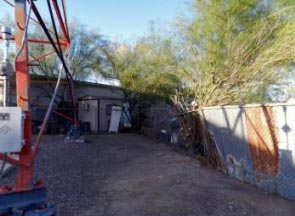 This is the same site and the same position as the first shot!

So, whether you are faced with a set of strange transmitter readings or not, it is always a good idea to have the area around the tower kept free of excessive flora and fauna.

It will not only prevent problems from happening, it will give you a clear view of the tower and ATU, so you are sure all is in order.

The Worst I’ve Ever Seen! – a tribute to the line our late friend Richard Haskey would deliver upon seeing a site like this – is not designed to embarrass anyone. Rather, it is a chance for us to learn from others’ experiences.

Do you have an interesting picture showing some “unique” engineering? Please share it with us all!