Build Your Own Tape Deck “Azimuth Tuner” and MP3 Checker

[September 2017] There was a time when every station had an audio test set, and one could check the frequency and phase errors of the audio chain. Today, with so much audio in the digital domain, fewer stations bother with the cost of gear for checking the analog. Steve Brown offers an easy, inexpensive project to check audio sources.

Like many folks, I am in the process of transferring old analog cassettes to my computer.

As you might expect, I found out pretty quickly that 40 years of cassettes each have different azimuth alignments, as they were recorded on different tape decks over the years.

One way to adjust the azimuth adjustments is to listen to the high frequency content on monaural portions of the tapes and adjust for the peak amplitude.

In this situation, I decided to build a simple circuit that would sum the two stereo channels out of phase so I could adjust the azimuth control for a null in the output, rather than a peak. Finding the null is easier and more exact than finding the peaks of high frequency energy, at least according to my ears.

I accomplished the task with a dual opamp, in my case a TLO-72 – but because only test audio goes through the system, any pair of opamps will work just as well. The inputs to my simple gadgets are unbalanced, of course, but adding a couple of opamps to the inputs to make a balanced input is fairly straightforward. 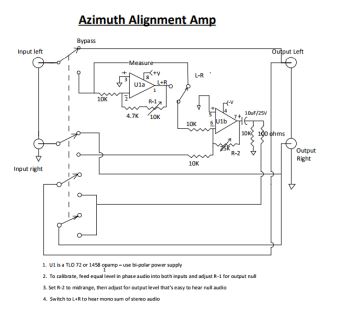 The circuit I constructed obtains a 45 dB null, and it really is easier to hear the null than see it on most analog or digital meters.

The output of the second stage can be used to drive a small separate speaker, or with the appropriate switching, the input to a stereo receiver.

Here is the way my project looks mounted in a small project box:

The front of my azimuth gadget. The volume control adjust on the front of the box is not necessarily related to the project – I needed a way to adjust volume between pre-amp out and power amp input and this was a convenient place to put the control.

Another use for this difference amplifier is checking the level balance of studio audio wiring or setting up analog distribution amplifiers with only an audio oscillator – even without a meter.

Simply feed an audio signal in phase to a balanced stereo pair of wires and connect the inputs of this gadget to the outputs on the other end of the wires. (If you have split a pair on a punch block or one side did not get punched down, the audio tones will not be at the null point.)

To set up a distribution amplifier, connect the audio oscillator and one input of the gadget to the inputs of the amp, and connect the other gadget input to the DA outputs; then adjust the DA output gain controls for a null in the tone.

Still another use for the gadget presented itself when a musician friend told me that he cannot hear the difference between a data reduced MP3 file and the original source.

In an uncompressed audio piece (sample here) the result is mostly just high frequency information (unless you are playing an old Beatles tape!) but playing a data-reduced piece through the system reveals all the artifacts that live in the “difference” channel.

Greater data reduction produces more artifacts, of course, but now I can show the musician what gets added to his art when he opts for recording using a data reduced format.

I am anxious to play some of these files for him to further his musical education.

Steve Brown, aka the Radio Ranger, is now retired from WCCO-FM and enjoys backpacking in the Land of 10,000 Lakes. You can email Steve at: radioranger@comcast.net