A Very Short, Unequal-Side Dipole for Low Power AM Broadcasting 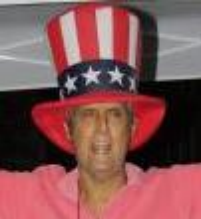 [November 2009] It could happen. A storm or a mechanical issue might cause a tower to fall. So being able to fabricate an emergency antenna can get you back on the air more rapidly. Grant Bingeman explains how.

If your AM broadcast band antenna suddenly came down, the station pretty much would be dead in the water. However, an emergency antenna can be constructed fairly easily.

The antenna discussed is basically a dipole, formed in a “V” shape. The overall length of the two dipole arms is about fifteen feet. The long arm is about 112 inches long and the short arm is about 68 inches long.

The resistance of this lossy antenna is fairly steady around 50 Ohms in the broadcast band, and the reactance at 2 MHz is about -1200 Ohms, getting much higher as frequency is reduced. For example, at 1.0 MHz X is about -2700 Ohms, and at 500 kHz it is about -6200 Ohms.

Note that the AIM4160 was placed right at the vertex of the antenna, and no intervening coaxial cable was present to distort the readings. Figure 1 shows the presence of some strong AM radio stations especially near the lower end of the band.

This is a very inefficient antenna. You can see that the actual radiation resistance is less than one Ohm, so the losses are enormous. The concept is an “emergency emergency” antenna to use until you can erect a larger emergency antenna.

With typical wire, most of the power would go into the coil used to tune out the capacitive reactance and you might get 50 Watts. If you are able to use acquire and use some ½-inch aluminum or copper tubing you should be able to do a bit better – the reduced reactance is a good thing, permitting better power transmission.

Grant Bingeman, P.E., is a design engineer, well-known in the broadcast industry for his work at Gates/Harris, Rockwell/Collins, and Continental Electronics. His email is GrantBingeman@cs.com Or, visit his website is at http://www.km5kg.com/ for more articles and software downloads.