[November 2017] Part of the Maintenance Shift is doing maintenance: ensuring the audio and RF chains are operating properly, reading the meters, and logging the parameters to ensure everything is as it should be. But, that might not be enough, as Burt Weiner recalls.

Let me tell you a story…

About five years ago I assisted a client in making his self-imposed every three months monitor point measurements on a conventionally licensed four-tower array that I have been involved with for years. By the way, all four towers are used in both the day and night patterns.

I know this array quite well. It has been quite stable, year around, wet or dry.

The Pattern is Broken

Before each set of readings we always check that the antenna monitor and common point resistance and current are correct.

On this particular day, everything looked good, so we went out to make the day readings. All the points were within limits and read approximately what they have always read.

We went back to the transmitter and went through the same procedure for the nighttime readings. Again, the antenna monitor read what it always did and the Common Point read what it should: 50-j5.

However, when we went out to the first nighttime point, it read about four times the maximum allowed!

I re-checked the meter calibration and that was ok. Then I grabbed my other meter, went through calibration, and got the same high reading.

Our first suspicion was that something nearby had caused the monitor point to change.

We decided to check the other two nighttime points and to our surprise found that they were also three to four times the maximum allowed.

As a sanity check, we went back and did the nighttime points again and found the same high readings.

Looking For a Reason

This transmitter plant is in a residential area, nothing obvious nearby, such as a crane or new power lines, no recent rains or anything that should cause a problem.

We checked the antenna monitor by feeding equal amplitude and phase into each port and the reference tower input. The monitor checked fine. What are we doing wrong or not seeing?

While the two of us were standing in the parking lot at the transmitter, I said to the chief, “Something’s wrong.” He said, “Obviously!” “No,” said I – “Look at the field! Do you see what I see?!”

I was pointing to the nice rows of fresh dirt where the radials of one of the towers had been pulled up. 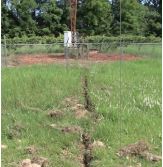 No one wants to see something like this, where the copper has left the ground

We had the ground radials and copper strap replaced by the original installer. The antenna monitor did not change, but the nighttime monitor points returned to their original proofed readings.

The Importance of Testing

So what is the point of this story? It is not to try to determine why this did not show up in the antenna monitor or common point readings, but rather that it happened!

If we had gone strictly by the antenna monitor and Common Point readings, amazingly enough we would’ve never known there was a problem.

Worse: after a few weeks, the nice straight furrows where the ground radials were pulled up would have dried out, or if there had been some rain, they would have probably no longer been visible.

If this chief had not been insistent on making regular monitor point checks, how long might this situation have gone on?

Had this had been a MoM license, with only the two-year re-certification required, it could have taken two years to maybe discover that the measurement locations were high. But so what, there are no limits or tolerances on them. But, having those for comparison is better than nothing. Although, good engineering would raise a red flag.

Without regular checks and something to refer against, how do you know if everything is working properly or what trends might be taking place?

On the other hand, do we really even have that anymore? So how long might it have taken under the new rule change to discover the problem? Maybe Seven years. They now say you do not have to measure them unless there is a problem.

More to the point: how might you know if there is a problem?

The Right Way to Do This

Keeping an eye on things and trouble-shooting is a big part of what we are supposedly paid to do.

The alternative – just burying our head in the sand to save the company a few bucks? Then really, we are basically saying “if we do not know that it is broken we do not have to spend the time and money to fix it.” Problem avoided!

I do not see how good engineering and regular checks of the antenna system can be summarily tossed out. Stuff happens! Reality rules! Keep a proper maintenance schedule – for the whole place.

Burt Weiner, is the top gun at Burt I. Weiner Associates, a long-standing engineering firm in Los Angeles and its suburbs. Burt has not seen everything, but he is close.