50 Years On – Radio Caroline Gets a License

[May 2017] Perhaps no station epitomizes the pirate radio era of the 1960s as Radio Caroline. Having suffered and survived physical damage, being outlawed by Britain, being boarded by armed police, and a Hollywood movie, it is still out there, operating from studios on the Ross Revenge.

It took a long time, but Radio Caroline has finally secured a full license to broadcast on AM, in addition to current digital/streaming services.

Although Caroline’s frequency and power have not yet been decided and announced, the station asked for 1 kW to serve Essex and Suffolk counties, most likely from a land-based tower, according to one of their engineers.

Ofcom – the British FCC – said they were looking for a well-established, stable group who had a history of providing service. In the end, they selected Radio Caroline, based on the ship MV Ross Revenge, has been visiting Thames Estuary area sites for 20 some years, often with small “weekend” licenses.

Back in the Beginning

It was Easter Sunday 1964 when Radio Caroline made its debut.

At the time, the British Broadcasting Corporation, The BBC, controlled all broadcasting in the United Kingdom. Although it had three networks to cover England, Scotland, and Wales, the BBC saw fit to broadcast only a pair of short programs on the weekend.

Among others, Ronan O’Rahilly saw a need and went on a crusade to get more rock on the air. Trying and failing to make satisfactory arrangements with the BBC, Radio Luxembourg, and the Dutch pirate stations, O’Rahilly finally decided to broadcast his own ship-based operation in the English Channel, the MV Caroline, just outside the UK’s International Line.

The first broadcast started with: “This is Radio Caroline on 199, your all day music station, “ and the Rolling Stones’ Not Fade Away.

It did not take long. By the end of the summer of 1964, Radio Caroline had more listeners than the three BBC networks put together. 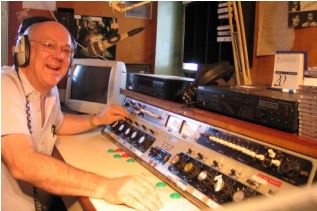 In one of the Caroline studios in 2004

As most know the general story, the British government took action to outlaw and eventually kill off the pirate stations. Most of them eventually were shut down, although pirate radio stations seemed to survive into the 1980s one way or another. Radio Caroline went through several iterations, including some time in Dutch waters, until finally a police armed raid seemed to doom the whole thing.

The Station Lives On

But the folks involved with Radio Caroline were persistent.

Eventually, Radio Caroline, in its new home, the MV Ross Revenge, found itself as a itinerant radio ship, moving from port to port while the crew worked on cleaning, repainting, and refurbishing the broadcast gear, including the RCA 50H. 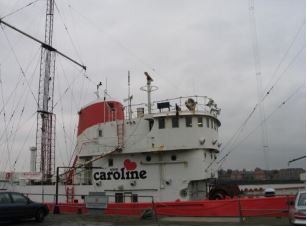 The ship would occasionally travel to different towns and broadcast on special short-term licenses as well more regularly via the Internet and digital media. 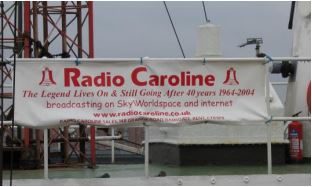 Rather than repeat the very nice history on the Radio Caroline site, we will point to that here.

As one might suspect, Radio Caroline and the other pirates were not purely British inventions. They went to great lengths to take the sound of rock and roll stations in the USA and adapt it to the British audience. Mike Vanhooser has kindly shared an aircheck with us of a program from KLIF discussing the pirate radio era.

Mike notes: “Here is an outstanding oral history of the Pirates, originally over an hour long with commercials, by Ed Wallace of KLIF, the Godfather of Pirate Radio (explanation follows).

“It starts out by describing all the ships, then concentrates on Radio London, which ended up the big dog of the bunch.

“The transmitters for London were Continentals, and Caroline were Ampliphase, and both came from Dallas. Dick Witkovski of Besco sold Caroline the RCA’s.

“By the way, if you think we have problems (even those of us from the good old days), you ain’t seen nothin’.

“Even Gordon the Great had a less than stellar operation, but Radio London, which was a literal clone of KLIF, Gordon’s flagship, was the king of pirates, even though he had nothing to do with London. It just shows how everything great comes from Texas!!”

There is also nice timeline chart of the pirate stations on the Radio Nord site. 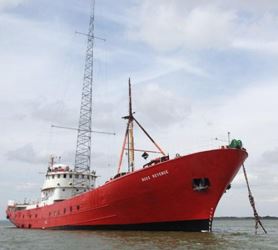