Where You Don’t Want the Sun to Shine

[February 2015] Wiring a studio can involve a lot of wires. Providing easy access to circuits for testing or changing inputs or outputs without having to open up the console usually is preferred. That is why so many engineers use punch blocks to allow that easy access. However, fast forward a decade and sometimes that convenience has a price.

Telephone-style punch blocks are a convenient way to interconnect wiring in studios and transmitter buildings. After their introduction in 1962 Bell Systems Model 66 punch blocks quickly replaced the old “Christmas Tree” as the preferred way to connect inputs and outputs to consoles and other gear.

They are usually easy to find and relatively cheap to purchase. Plus, an installer can make a lot of connections pretty quickly with a good punch tool.

As with any tool, there are proper ways to use them. For example, the 66 block is designed to be used with the typical telephone 22 or 24 awg solid core wire. Use of other size or type wiring can prevent a good, long-lasting connection, and sometimes leads installers to use a different type of block.

For example, thicker wire can warp the blades on the terminal block, resulting in a connection for the moment, but on that may be unstable over time. On the other hand, the thinner wire might not provide the blades with a solid connection. And the use of stranded cable easily can result in shorting two rows of blades or eventual intermittent connections.

And then there is the “minor” matter of where you put the block.

Next to the Window

Most times, you will find them under a table, in a closet, or on the back wall behind equipment racks. But there is one place you sure do want to avoid: as the title above hints – and that is where the sun does shine.

Unfortunately, some blocks, like the one shown here, get left in bad locations – including those where there is direct sunlight – for years. 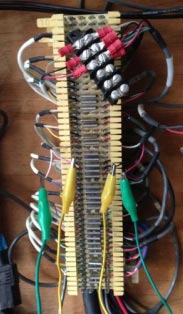 The block’s plastic will warm-up, and then later cool down.

As evidenced above, the result of such a repeated expansion/contraction cycle is to eventually cause the connections to become intermittent, one after another. Then, as people race around, and notice that just by touching the wires they can find the problem, quick fixes are employed but usually there is no time to stop to replace/relocate the block.

Temporary and/or semi-permanent solutions that are most often seen include “re-punching” the wire if there is enough slack, alligator clips, and a bypass screw terminal strip. Unfortunately, “temporary” often means “decades,” as those fixes, sometimes undocumented, sit there engineer after engineer, until the wire and the blade part ways.

As you can see, a combination of such “fixes” is on display here. The terminal strip actually was used to get the program line back in service. The alligator clips were used on another circuit.

Currently, the word is that this particular punch block has a relatively short life span ahead – and its replacement will be in a location where the sun does not shine. Really. This time for sure. Real soon now.

As soon as we have time.

Some would just replace the punch block. Others might use a different style block. Yet others will smile and say “time to install a digital console.” What have you found to be the best way to resolve situations like this?

As always, the station and location are redacted to protect the … err … protected

Not the worst you have seen? Please share your pictures with us! Names and places are optional; embarrassment is not the goal, rather finding a teaching moment.