Vertical Revenue for AM Stations

[February 2015] Every company has a business plan to identify clients and build income from its traditional sources of revenue. Broadcasters are no exception. They mostly sell commercial time or seek underwriting.

But are there non-traditional sources worth checking out. Dave Dybas looks at one potential source that stations may not have considered.

In the past few years nearly everyone has been looking for an additional source of revenue.

AM broadcast stations are no exception – and indeed are often the most in need of a boost to the bottom line. One area frequently overlooked, which is a great source of non-traditional revenue, is the vertical real estate provided by broadcast towers.

Here is an idea: With the widespread acceptance of cellular phone service, many of the service providers are in need of a tower on which to hang their antennas.

Considering the various zoning and permitting issues, it is often easier and much cheaper to locate cellular antennas on an existing tower, rather than go through the process of building a new cell tower. This is where the AM broadcast tower has its appeal.

Many AM broadcast towers are located in areas once rural but now are being surrounded by high density residential developments. This residential growth is appealing to cellular service providers because, logically, more people mean more potential cell phone users. and they are willing to pay the broadcaster a very fair price for that vertical rental space.

It Was a Tech Problem

For a long time, the considered wisdom of AM broadcasting meant that attaching anything to an AM broadcast tower was bad engineering, and an invitation for trouble.

For instance, many worried that their iso-couplers could fail and short the tower to ground causing the station to go off the air.

And, even if they did not, any addition – even of a small antenna – to the tower affected the base impedance in bad ways. Worse, if the tower was part of a directional antenna system, attaching anything to the tower would create never-ending grief.

Fortunately, technology has progressed since those days. There now are solutions that allow cellular antennas to co-exist with AM broadcast tower. Primarily, modern cellular technology now has the RF transmitting gear located up on the tower. The only cables going up the tower are power and data cables (containing the phone calls) eliminating the long coaxial cable runs up the tower.

An effective solution is to “skirt” the tower.

This solution works by grounding the tower at its base – and using the skirts for the AM station, leaving the tower for cellular installations. The cellular equipment is mounted to the grounded tower without the need of iso-couplers. 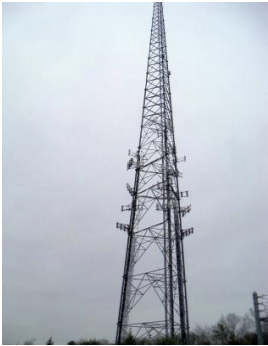 On this particular self-supporter the actual AM antenna is an 8-wire skirt.

In fact, this antenna is even part of a directional array. I am told it performs well and is stable.

Another solution for cell service co-location involves the use of iso-couplers on all cellular site cabling providing isolation between the cellular gear and a hot AM broadcast tower.

Yes, we said iso-couplers. Modern iso-couplers are much more reliable than those installed years ago. A good source for these iso-couplers is Kintronic Labs. They have complete solutions ready to install for a wide variety of situations.

Detuning May Be the Best Way

A third solution is to allow a cellular service monopole tower to be built on your AM antenna property and “detune” the cellular tower.

While a bit more complicated, this works on a directional array as well. I know one directional AM facility, which has 5 cell towers located within 100 feet of its 6-tower directional array which hosts two AM stations diplexed together. Each of the cell towers are detuned at both AM frequencies and the AM array is not impacted by them at all. 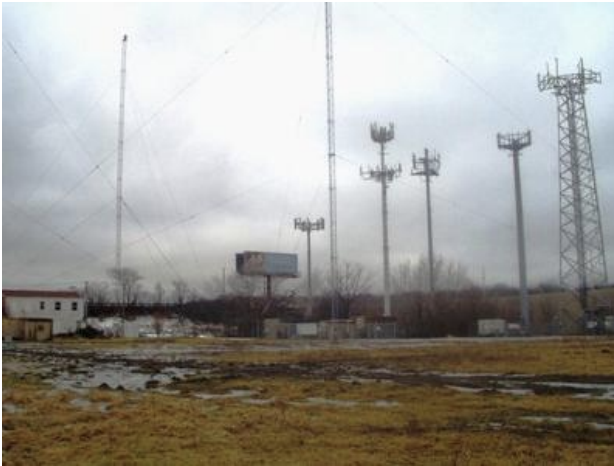 The cell towers had to be detuned as an “array” because the detuning of one affected the adjacent tower (mutual coupling). Yes, there was lots of running back and forth between cell towers to tweak the settings. But, in the end, it all came together and the system performs well.

The site is for WKTA 1330 and WEEF 1430. I worked there with Waterford Consulting to detune the cell towers – and a billboard that was close by. It was a very interesting project.

While I have addressed mainly the co-location of cellular phone equipment, the techniques described can be applied for nearly any wireless service that wants to co-locate their equipment on an AM broadcast tower.

For example, think WiFi or Wi-Max, in addition to STL and RPU antennas.

So, the next time someone wants to mount their antennas on your AM tower, think of the sound of money jingling in your pocket before you dismiss their offer.