When the County Says “Move That Tower!”

Written by Ted Thayer Posted in In the Trenches.

[August 2019] Often, broadcasters operate as a business, getting the job done. But often, having a good relationship with local governmental authorities will help when dealing with important matters that impact the station operation. Ted Thayer recalls:

A recent item in the Broadcasters’ Desktop Resource brought back memories of an incident I had to endure with Pima County, Arizona back in the day.

“CHATANOOGA DOES RIGHT When an employee hit a guy wire, the City did not hide.” was the title. WNOO’s broadcast tower had collapsed completely when the guy wire was clipped. The city announced they would do more than the minimum – they would make the station whole again.

What a wonderful example this is of how broadcasters and their communities can work effectively together!

That radio station had three tall towers – comprising a directional array designed to keep the night-time signal from interfering with several other US stations and a station in Mexico. Each tower had a slew of anchored guy wires so as to hold them solid and straight.

As most know, there is more than just guy wires to broadcast antennas – AM radio requires a solid earth connection to match the signal in the air to its twin in the ground. There can be miles of bare copper wire spread out underground, radiating from the ground buss at the bottom of each tower.

KIKX was located on Swan Road – one of the main connectors from mostly flat Tucson to the Catalina Foothills on the North side of town.

Swan Road went past the radio station in a graceful curve, avoiding entanglement with the ground wires on the Northeast end of the array.

I was home one afternoon, relaxing after a busy day that had begun at 5:30 AM when the phone rang. The station manager had called to let me know I needed to talk with the County Engineer. It seemed the County was planning to straighten and widen Swan Road and they wanted us to move the Northeast tower and its ground system.

Now What Do We Do?

Quickly, I called the Engineer’s office and arranged for us to tour the tower array and the planned realignment of the road.

All-in-all, we had a great visit and then hit a local restaurant to chat over coffee.

While we were enjoying the refreshments, I explained our situation to him.

I told him our problem was not something we really had any control over – moving the tower would take several years and involve acquisition of more property to the West, which actually was not likely because of the houses already there. In addition, we would have to get permission to move the facility, as well as a construction permit from the Federal Communications Commission.

Finally, I clearly explained why, if any part of the array was disturbed, there would be huge problems with the Federal Government.

The Engineer understood we were not trying to be difficult, and met with a number of other County employees to try to come up with a solution.

I believe it was the County Assessor who suggested that several large parcels on the East side of the proposed right-of-way were undeveloped and had a common owner.

The group decided to see if a land-swap could realign the road in a long, sweeping turn around the array, the guy wires and the ground system. Of course, always in the background mix was the veiled threat of extended litigation between the radio station, the FCC and Pima County.

Well, after a good deal of negotiation, they actually pulled it off! Today, on your way up Swan Road to Sunrise (an Old Pueblo main East-West connector) there are still a number of sweeping, gradual turns that take you along-side where KIKX-AM used to be. The site is still in use as the City of Tucson acquired it and uses the towers for various city communications needs. 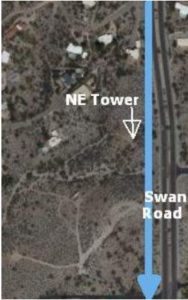 A satellite view of the area with the NW tower and original alignment proposed by the County marked.

John Walton famously lost his license for KIKX years after I was gone – for unlawful promotional indiscretions including staging a faked kidnapping – which ended involving the Pima County Attorney and Sheriff’s Offices, the Federal Bureau of Investigation, and the Federal Communications Commission which, despite many appeals right up to the D.C. Circuit Court of Appeals, held firm in revoking the license.

I was sorry to hear that happened. KIKX was a great radio station, one with which I was proud to be associated. But the experience of getting what initially was a big problem solved has been a great memory.

Ted Thayer was a broadcast engineer and disc jockey before a career change led him to Globe, AZ. Now retired, Ted stays busy with his journalistic interests, including hosting and webmastering a number of websites. You can contact him at ted@tedthayer.com