[October 2013] Here is another in our series of pictures that will make you laugh, groan, or (and we really do hope not) spit up your coffee. Of course, your facility looks nothing like this, does it?

Time and again, no matter how carefully a studio or transmitter site is planned, almost immediately – even during the construction phase – the modifications and additions start piling up.

Often changes develop when someone points out some source or remote connection that must be available in the Control Room was forgotten either during planning or construction.

Of course, whatever it is needs to be installed “right now!” So, everything stops while a wire is strung and tested.

There never was any doubt but that the engineer intended to go back and clean up the added wires, running them neatly, cleaning them up using ty-wraps, etc. to keep everything together, and documenting it all carefully.

That was the plan. And, really, anyone who says he or she never has been in that situation at one time or another is not quite telling the truth.

But, as the various demands on time flow, what can you say? The cleanup keeps getting put off.

And you know exactly what will eventually happen. 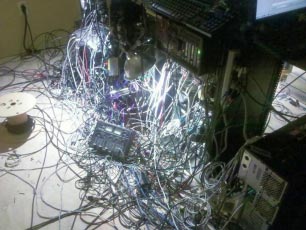 It all started by adding one more wire

The picture above does come to us from a small town radio station. However, it could have come from almost anywhere where there is a lot of work to be done, and a tiny tech staff.

As is often the case, the wiring minefield in the picture was discovered by a new engineer, who suddenly saw all his free time for the next several months pass before his eyes.

One even can image that, for more than a few moments, he seriously considered the wisdom of taking the job in the first place.

This pile of wires did not exist for very long after the picture was taken. The chances of a wire being disturbed, coming loose, and taking the station off the air was too great. Thus, after cordoning off the area so others would not disturb the wiring, the engineer scheduled a quick “root canal” job.

The mess of wires is now long gone, replaced with an orderly, documented wiring plan.

Do you have a picture of something that just takes your breath away? Please share them with us. We will not identify the facility – our goal is not to embarrass, but help point out some areas that may need attention. Send your pictures (or ideas) to Editor@theBDR.net

Thanks in advance for sharing!