When Getting Back On The Air Trumps Neatness

[February 2011] When a broadcast station is off the air everything comes to a halt, including income. So there is a great need to get the transmitter fixed, even if some of the repairs are temporary. These picture comes from such a situation. 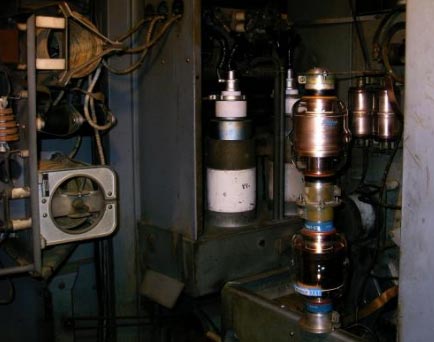 You are looking inside the back of a vintage BC-10B transmitter, in a small market station. The plate overload was tripping, taking the station off the air.

The engineer tracked the problem down to a bad 500 pf, 30 kV vacuum capacitor. But, given the age of the transmitter and the difficulty of finding a re-placement – not to mention that even a used capacitor sells for $1400, plus tax, shipping and hand-ling – getting back on the air quickly presented a problem.

The solution chosen by the engineer might seem to be “The Worst” but really, when balancing costs and time, this temporary solution might not be considered so bad. He reached out to various spare parts bins and found a pair of 1000 pf capacitors. Together they made 500 pf, and the transmitter was back on.

Dubbed the “Tower of Babel,” and hanging out the back of the PA compartment, nevertheless it stopped the loss of airtime.

Of course, these older transmitters have more room inside than many more recent models do – so there was plenty of room to accomplish the task. Those with a transmitter that can fit in a rack would have a much harder time making this sort of substitution. (A topic for another time: way back when, the Transmitter Room was the transmitter room – with the building put up around the transmitter!)

Purists might recoil at this image of two 1000 pf capacitors stacked in such way, but again, the goal was to get back on the air – and that is exactly what was accomplished.

In the “old days,” many stations stocked spares for most parts to ensure rapid repairs. Today, many stations have empty shelves, due to the costs and/or availability.

One thing is for sure, the owner of this station should be scrambling to find a way to replace this BC-10B. In this current economy, that is not always easy, but as more and more stations look at the costs of running (electrical) and repairing these older transmitters, the better a new one might look on the budget.

A last thought: even in these days of solid state transmitters, having an auxiliary transmitter on hand is never a bad idea.