Written by Tom Bosscher Posted in In the Trenches. 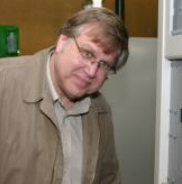 I have heard of transmitter fires, but how many folks have been attacked by their antennas? Pull up a chair and let grandpa Tom tell you this story.

It was around 1977 or so. The station was WLAV-FM. I had just installed a new 400-foot tower, with a brand new McMartin BF-25 transmitter and a brand new 5-bay antenna in them thar’ fancy white radomes.

Now keep in mind that the owner ordered the equipment first, then he hired the engineer. I would have preferred to specify different equipment. (In fact, I begged him to get a Collins FM transmitter.)

Everything was fine for a few months. Then I got a call from a friendly neighbor that the top tower light was all white, no red was showing. I thought: “Great, someone shot out the lens.” Back in those days, the FCC actually mattered, so I drove out to the site.

From three miles away I could see the white light from the tower. But it was on all the time. Great Guns! I figured the flasher had gotten stuck and shorted out. But as I got to the bottom of the road leading to the tower and walked to the gate to unlock it, it finally struck me: I could see a flashing red globe, maybe 20 feet above the white spot!

Getting to the building, it was pretty obvious that I had one bay arcing.

The transmitter showed 1.2 VSWR, up from the dead flat. I turned the transmitter off, then back on (thank you for the stories about the 500 kW WLW transmitter that arced). The arc stopped, and the VSWR now was normal. I stuck around for a bit to observe and then left.

The very next day, the transmitter dumped off and stayed down. When I got out to the site, I found the VSWR lamp tripped. I reset it and fired up the transmitter. I figured I would sit around for a bit and watch this for a while.

So I started some needed housecleaning. Thirty minutes later, as I was sweeping dust out the door, I heard the transmitter cycle off and on. A quick glance across the room showed the VSWR lamp lit up again (the last recycle holds the transmitter on the air). Still, everything else looked OK.

Now For Some Real Trouble

As I started walking out the door. I heard a whining, shrieking sound. Suddenly – just ten feet from me – a smoking piece of brass and copper landed. I glanced up, and I saw not one, but two white radomes on fire floating down!

I was under attack from my own antenna!

Quickly, I dove back into the “thank God it’s concrete” building and waited. Two bays-worth of copper and brass and two burned up radomes were sitting just a few feet from my truck. I waited. I waited some more. I waited even longer. And with my eyes up towards heaven, finally I walked out the building.

Under a New Antenna

I ordered out an exact replacement antenna, except this time I specified no radomes.

When the replacement arrived, its helix spacing was twice that of the burned up antenna. To this day, I am convinced that originally I was shipped a low power antenna, and had been running my full 21 kW TPO into it. Happily, the replacement antenna held up.

Somewhere I have some Polaroids of the two antennas side by side.

Tom Bosscher is Chief Engineer for Cornerstone University’s stations in Grand Rapids, MI. He can be reached at tom@bosscher.org