[October 2008] In recent years, the benefits that microprocessors have brought to the audio processing industry have started to filter down from the high-end units to the rest of the models. Features that used to be found only in units costing well over $10,000 can be had for less than a third of that. As Tom Taylor points out, this has helped a lot stations upgrade their sound, even on a modest budget.

Back in the “Good Ole’ Days,” vacuum tube-based computers took up entire floors in buildings; a large staff was required to operate and maintain them. However, their performance was not much better than an inexpensive modern scientific calculator.

Today, single chip-sets on small circuit boards can eclipse the performance of even the most powerful of the early personal computers. As radio technology also moved from tubes to transistors, and finally to microprocessors, even the smallest station now has the tools to present a cleaner, more consistent sound.

This stunning improvement in computational power has enabled both digital processing, both of the audio and control chain. And as the technology matures, the performance and pricing just get better and better – something that makes everyone sound better.

Telos-Omnia is one of the companies at the forefront of the digital revolution. Steve Church and Frank Foti have been industry visionaries and lead a company producing an innovative, cost-effective product line. And I especially like a company led by former chief engineers – guys who have walked the walk and truly understand the industry.

One of the products introduced this year, and a true paradigm shift in audio processing philosophy, is the Omnia ONE.

Using the latest digital processing techniques and designed as a “universal hardware platform” the ONE provides the flexibility to perform many different jobs in the broadcast facility. The dual firmware banks allow different “modes” of operation to be stored. So no matter what kind of “cast” you need processing for – AM, FM, HD, podcasting, or streaming – the Omnia ONE will be a formidable option.

Under the hood, a wideband gain-rider plus four-band AGC allows fine adjustments to create a “signature” sound.

The station I engineer, WRAS, Atlanta is a student-run 100,000 Watt station owned by Georgia State University. We were finally getting ready to stream the station’s audio and I needed to get appropriate processing. Fighting a limited budget, I looked at the various software solutions and was leaning in that direction until an engineer buddy told me about the new “wonder box” from Telos-Omnia.

At $2,995 retail, I was not expecting much. I have tried dozens of various and sundry “cheap” processors over the years. There was always a reason they were cheap – usually because they sounded cheap. As I looked at the unit, I guessed we could probably make the “wall of sound” – but I carefully saved the packing material because I was sure it would be going back.

I decided that to really get a feel for the ONE’s “personality” I would need to try it on the air. After all, one of the selling points was the ability to make the ONE an entirely different processor, depending upon how you use it. In addition to handling the streaming, the ONE would serve as a backup to the main audio processor – so I needed to find out how well it would work

Generally, installation was a snap. The ONE occupies only one rack unit, with no ventilation holes, so finding a place for it was not difficult. My only complaint was the AES audio interfaced through RJ45 connectors. (I had a loaner – the cables were missing.) Nevertheless, after building the appropriate adapter cables it was smooth sailing.

Setting up the Ethernet connection was somewhat painful because of firewall issues with my DSL modem, but after getting the modem settings correct the IP connection through the built-in browser was excellent. In fact, I used a laptop with a 3G card and punched through all the presets while sitting in the car. (The best way to make the PD happy is sitting in the PD’s car and listening to what they hear every day.) One of the remote control screens 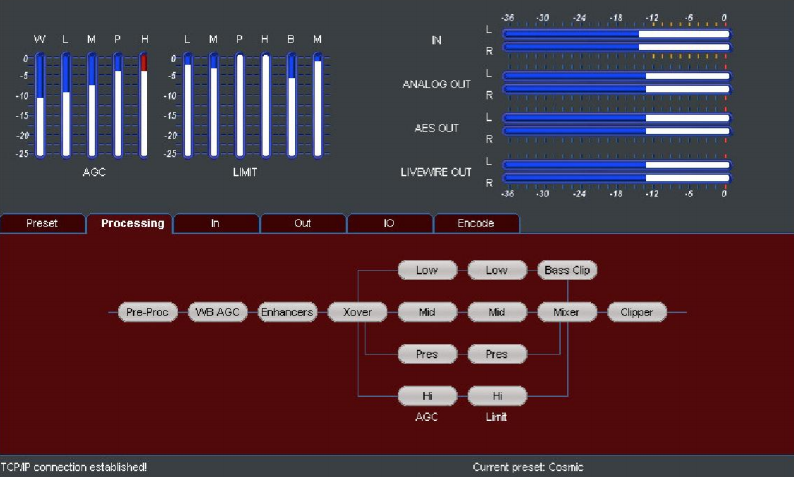 One of the remote control screens

The menu is very intuitive and very much like the usual Omnia format. It was very easy to dial in the input/output settings, set pre-emphasis, and then select a processing preselect.

I started with the “rock” preset since the station plays typical college radio material during the daytime. I figured this was a good starting point. I did modify the rock preset to add a little more “brilliance” but my adjustments were minor. For the most part, I was happy with the preset as it was – at least for the alternative/rock dayparts.

The sound was simply amazing! I switched back and forth between my $10,000 main processor and the Omnia ONE and could not believe how close they sounded. The $3,000 processor sounded just as smooth, just as silky, and just as intelligent as the $10,000 processor – it was just fantastic.

The real test was when different types of music were played in the specialty shows. The music genres on the station ranged from classical to blues to bluegrass. I was amazed at how intelligently the processor handled each of the different music types, especially Classical. Dynamic range is important to Classical music, artistically, and the ability of a processor to create “perceived dynamic range” says much about the sophistication, or “intelligence” of its processing algorithms.

The Omnia ONE was very graceful, even with the moderately aggressive “rock” setting. Dynamic range was “squeezed” enough to make the quiet passages loud enough in a noisy truck, but the music still sounded like it had quiet and loud elements. It sounded very much like the local NPR station, which I think has a great compromise between loudness and quality – and a much more expensive processor!

New presets are continuously being developed and can be easily downloaded as can software updates. And in my experience, Omnia customer service is second to none – they will help you set up and tweak your ONE until you are happy.

A Processor for All Occasions

The ONE’s flexibility is certainly a key feature. An AM/FM owner could use one processor to back up both stations. It can also back up the web stream processor or the production room processor. I will be using my original Omnia ONE for the Internet stream, but we plan to buy another for the auxiliary transmitter processing chain.

It is nice to know that these two processors can handle any audio processing job in the station. I can even help out if one of the local AM stations in the area gets in trouble and needs a loaner.

I have only two complaints. As mentioned earlier, I did not like the AES interface (although it is plug-and-play with Radio System’s Studio Hub cabling).

Also, I would have liked a day-part automation scheduler. There are remote select inputs which could be used in conjunction with an external automation timer, but it would be nice to have it built-in. I am not sure if many stations have occasion to change the processing during the broadcast day, but with the wide variety of music types and programming at a college station, this capability is something you really must have so it can be put to good use.

Being in Good Company

I appreciate and seek out companies who provide quality, innovative products with technical support which we can count on in the future. Thus I would like to thank Church and Foti for all they and their company have contributed to making radio better through technology and its intelligent use.

And thanks to the Omnia ONE – now any station can have a “major market” sound at an affordable price.

Tom Taylor is the Chief Engineer for WRAS, Atlanta, as well as a Staff Engineer at CBS Radio, Atlanta. Contact Tom at: taylorengineer@bellsouth.net