The 53rd edition of the International CES was in Las Vegas, as usual, with an attendance of 170,000 or so, over 3 million square feet of exhibits from more than 4,400 exhibiting companies, including 1,200 startups, and a whole lot of eye candy.

The first thing you cannot help but notice is the construction. The LVCC is growing – that is obvious. What was the whole parking lot to the west of North Hall is now under construction, as is a lot of what was the Riviera Hotel. And, it is big.

Of course with over 170k convention attendees added to the normal Las Vegas activity, roads were jammed even more than unusual. Backups of a mile or more were common: some lights took five or six cycles to get through!

If there was an overriding theme, it was clear that the Internet of Things (IoT) is encompassing more and more technology, from climate control to dishwashers to home security – even toilets (!).

By adding Artificial Intelligence (AI) to the IoT, it almost seems like Star Trek computers have arrived, controlling everything from task specific robots to drones to self-driving cars. Integration with “assistants” like Alexa and Google Home is proceeding as “standards” are being worked out. Overall, it is rapidly becoming possible to do almost anything from almost anywhere – talk about reducing users to the ultimate couch potatoes!

A very large part of the North Hall was devoted to electric cars of all sorts, and walking across to the Central Hall, the 4k and 8k televisions, complete with curved displays, were nothing less than stunning video.

Of special interest to broadcasters was the ATSC booth, with displays and explanations of how ATSC 3.0 is planning to change broadcasters’ offerings.

Overly simply put, ATSC 3.0 is a marriage of the newest television features with the Internet, allowing any number of offerings, from weather and/or traffic screens to streaming of special reports or archived materials. You might find enhanced EAS messages targeted to specific areas or the latest news program ready for selection.

According to the ATSC, some 20 markets have experimental ATSC 3.0 broadcasts on the air now, with a goal of 40 markets operating by the end of 2020. During the Show, at least three manufacturers announced availability of ATSC 3.0 compatible receivers by summer. Word about adapters for existing receivers was also on the floor.

A display in the booth pointed to a web sit, now up and running, showing what has been done in Phoenix, for example, with a manual to help broadcasters understand and get ready for ATSC 3.0.

Another hot topic for broadcasters is the 5G rollout and how it may affect satellite reception and other services.

However, getting anyone to talk about the potential satellite problems was a lot harder than hearing how 5G was going revolutionize Internet speeds. FCC Chairman Ajit Pai was at CES to evangelize about his vision for 5G in an interview with CTA President Gary Shapiro. 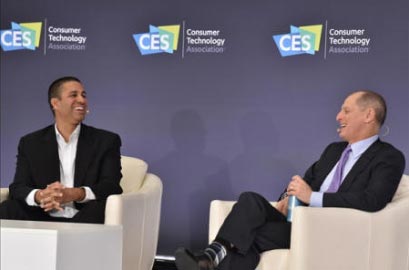 They discussed Issues like spectrum allocation and auctions, also the lack of American 5G infrastructure suppliers, fiber deployment, and wider broadband access in rural and tribal areas. Pai pointed out that one of the big problems holding back wider deployment is not a matter of technology, but manpower. “In many parts of the country, it’s difficult to find people able to do this work,” he said.

Pai also defended his new Interne carrier-centric rules. Pai proudly asserted. “Since we made the decision in December 2017, broadband speeds are up 60 percent, infrastructure investment is up, more Americans are getting connected to the Internet than ever before … breaking the record we set in 2018.

A Lot to See

Again, there was more to see than time to see it. In addition to the Show Floor, special presentations were in hotels all along the Strip.

We will present more in-depth discussions of some the categories of products show, but here is a quick summary of some of the more broadcast oriented items.

Displays of significant interest to broadcasters included improved storage – both energy and data – options. Solid state hard drives have really come into the “zone” where cost is no longer an impediment.

Need enough power to overcome a power outage? Some systems shown could supply 5kw for an hour. Others used newer solar panels to augment/recharge the storage. One, in particular, was a
cellphone-sized unit that not only generated power by solar, but also was able to wirelessly charge your phone.

Need a REALLY bright flashlight. How about 5800 lumens? This rechargeable, emergency light will let you see everything. OK, this is not for everyone, but at $450 it is sort of the ultimate flashlight! More modest models are also out there, as LEDs have gotten brighter and brighter – and cheaper and cheaper.

Also useful in the field are some security solutions.

One of the more annoying hassles for technical folks, especially if they work at more than one site, is the number of keys or key codes they have to carry or remember. Lock makers displayed a number of models that function with fingerprints, Bluetooth (for anti-hacking), even Morse Code! And the number of locks that are suitable for outdoor use are now large enough to make it possible.

Some locks now include cameras. Getting a “look around” your remote sites has never been easier. Picking the right solution may take more effort.

Turntables that can handle archiving old stock or playing new vinyl were on display, with pricing from modest to stratospheric. (Yes, you can get an SP-10 from Technics … but be sure your budgetary seat belt is engaged! More modest, but high quality, turntables from Audio Technica range from $99 to $850.

Headphones are there, yes, but ear buds are everywhere. The buzzword this year was “True Wireless,” meaning two ear buds, no wires. Using apps, you can send audio to them without getting tangled in wires. Newer codecs have improved audio and reduced latency, but for most folks, not enough for live on-air use.

As noted, in the next week or so, more detail will be here, as well as some specific links to products. Stay with us!

Thanks for reading this review.