The ZAGGfolio for the iPad

[October 2012] Apple sure has sold a lot of popular electronic items. The iPad was no exception. As with the other Apple products, a robust after-market has developed to provide some additions Apple did not think necessary, among them protective cases and keyboards. One combination stands out and is worth your consideration.

When I first started using the iPad, figuring out how to accomplish some tasks often was somewhere between “frustrating” and “mildly annoying.” The on-screen keyboard was occasionally convenient, but utterly frustrating when trying to type more than a few words in an email or note.

Then I learned about the ZAGGfolio, a portfolio cover and keyboard for the iPad. ZAGG is one of many companies developing quality accessories for mobile phones and tablet computers. From screen protectors and power sources to keyboards and protective covers, the company has built quite a line of products.

For me, the ZAGGfolio made using the iPad a whole lot more enjoyable.

After getting my iPad, there were two things I wanted to do as quickly as possible, get a cover to protect the tablet – both from physical damage and theft – and a keyboard. The ZAGGfolio filled the bill.

The Carbon fiber models come in eight polyurethane colors; there are three leather-covered versions. And a newer version with backlit keys for working in low light areas is due out on the market shortly. 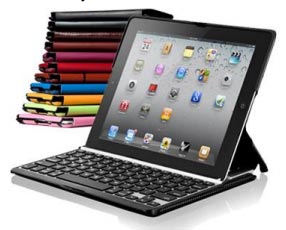 The ZAGGfolio comes in plenty of colors

In addition to serving as a cover, the ZAGGfolio quickly converts into a stand allowing the user to have an experience almost like a notebook computer.

But that is only the start.

There is a magnet in the case that automatically turns the keyboard and the iPad off when closed – and it turns them on when opened again. You do not even have to slide the “unlock button” to get back to work with the tablet.

The Bluetooth keyboard can be removed so the user can place it and the screen in a comfortable position (the notch in the keyboard also permits the tablet to be mounted in portrait orientation). 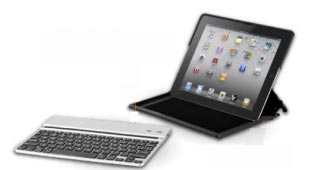 The Bluetooth keyboard can be moved away from the screen

For example, if you are showing a series of pictures or videos to a friend or colleague, you can move the keyboard to where it is easy to operate for them to see while you control things.

The tactile feedback from keyboard felt pretty good. Once my fingers got comfortable with the location of the keys, typing emails and documents was quick and easy. In fact, the arrow navigation keys were quite handy in moving the cursor to a specific spot, something not as easy to accomplish with the Apple touch screen and software.

Other keys make for quick jumps to the “desktop” or to use other functions while viewing or listening to files. You will not stop using the touch screen, but you will find the keyboard does work well. The re-chargeable lithium ion battery will run for several weeks of hard use between charges. With lighter use, it will last for months.

The ZAGGfolio weighs only 19 ounces, including the 11.5 ounce keyboard, or a little less than the iPad itself.

Together you are looking at something less than three pounds to carry – but when you are just reading text, the screen will slide right out of the holder so you holding under a pound and a half.

I did not need any tech support from ZAGG to set up and connect the keyboard to the iPad as the setup instructions were clear and worked well and quickly.

About the only significant criticism of the ZAGGfolio is that some of the small edges of the polyurethane cover tend to peel a bit. A little touchup glue seems to have fixed the problem. Perhaps the newer versions are using a longer lasting glue.

One thing is worth checking: with some slight but real physical differences between the iPad versions, you will be much happier with the results if you make sure you get the right version of the ZAGGfolio.

If you are interested in getting more information on the ZAGGfolio, you can visit the ZAGG site or vendors like Amazon.com