A Plan to Install a Plaque to Honor Edwin Armstrong 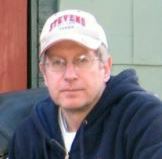 [October 2012] Historical plaques are found in many places to record important places and persons in the history of the country. In Yonkers, NJ, an effort is underway to set a plaque reminding people of the inventions of Edwin Armstrong. The head of the effort is a Yonkers man, Steve Klose.

It all started with a red motorcycle.

Admittedly, I am not much of a “radio guy.” I do have a small collection of vintage radios, but I am a motorcycle guy at heart. To that end I keep a blog about motorcycling in the Lower Hudson River Valley of New York and New Jersey.

Years ago I saw the Ken Burn’s documentary “Empire of the Air.” I became intrigued with the Edwin Armstrong story (why had I never heard of this guy?) and the fact that he rode a red motorcycle was just the icing on the cake.

This eventually led me on a search for a photo of Armstrong on his beloved 1909 Indian motorcycle to post on my blog. I spent hours on Google, I contacted members of his family, and even searched through hundreds of photographs at the Armstrong archives in the Butler Library at Columbia University and came up empty.

I am still looking for that photograph.

After leaving the library my next stop was Armstrong’s former boyhood home in Yonkers, only a short ride north from Columbia (where Armstrong is credited with inventing broadband FM), to see what recognition there was perhaps a plaque to this hometown genius. To my surprise and disappointment there was none.

Armstrong clearly was one of the greatest minds of the 20th century, yet his is not a household name.

I want to make people aware he really was from Yonkers. Armstrong, actually born in New York City, moved with his family to Yonkers in 1902 when he was 12. Their home was at 1032 Warburton Avenue.

Armstrong attended Columbia University and while there began his career as an inventor. Several of his ideas were first constructed in his parents’ attic there in Yonkers.

He was a genius. He should be recognized as such.

Scanning the area I noticed a towering statue around 18 feet high in a small park just across Warburton Avenue.

Well, the figure certainly did not look like Armstrong (it turned out to be Henry Hudson, gazing north up the river). I found two inscriptions; one to Hudson (Warburton Ave. is on a cliff overlooking the Hudson River), and another to Robert Fulton of steamboat fame. But, conspicuous by its absence, there was no mention of The Major.

I thought perhaps I could correct this oversight.

The Plan is Born

My first thought was to have an inscription added on the pedestal to Armstrong. Simple, clean and easy and who would object to it (besides Lee de Forest or David Sarnoff)?

I created a mockup in Photoshop, priced it out, and went looking for funding. I figured if the project was “shovel ready” the city of Yonkers had no alternative but to approve it. 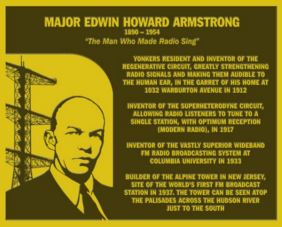 Now, it was time to secure some support.

Empire of the Air

The 425-foot-tall Armstrong Tower is in tony Alpine, NJ, high atop the Palisades. It is clearly visible from the cliffs on the other side of the Hudson on Warburton.

At first, I knew little of the tower except that it was still operational – and truly earned its keep by working overtime after 9/11). Now I know that Armstrong built the tower in 1938, where he placed his new invention: FM radio.

Before I saw Empire of the Air, the tower was just another gangly structure to me. Now it was a monument to Armstrong’s genius.

My next stop was to contact someone at the tower site.

Enter Dave Amundsen, Director of Engineering for CSC Management, keepers of the flame so to speak at the Armstrong Tower.

I called Dave and asked if he would allow me to shoot some video for a blog post. He agreed, and a week later it was kickstand up on my red motorcycle (a Kawasaki) for the ten mile trip to Alpine.

After an exciting tour of the facility (this has got to be the Mecca for radio enthusiasts on the East Coast – if not the entire country), I let Dave in on my plans.

Dave took it one step further and arranged a meeting with some like-minded colleagues.

The meeting at the Armstrong Tower, of course really got things rolling. A road trip to the Hudson/Fulton statue was arranged for them to get a feeling for the project. I invited a member of the Yonkers Historical Society along for the fun.

My mission to honor Edwin Armstrong also had produced a video about the tower, uploaded to YouTube and my blog.

It quickly became apparent that an inscription on the Hudson pedestal would not do Armstrong justice.

For one, the statue faced the river. Furthermore, time and erosion had left scarcely eight feet and a rusty chain link fence between us and a thirty-foot fall. Finally, the statue and pedestal have been neglected and vandalized over the years, with weed trees growing unchecked, blocking the view of the tower.

We knew we could – and should – do better.

And then we found it.

Scarcely eight yards north of the statue is the Greystone Train Station with a beautifully unadorned stairwell wall (the stairs go down the side of the cliffs to the station) and a great view of the Armstrong Tower to boot.

We knew right away a brass plaque on that wall would be the way to go. 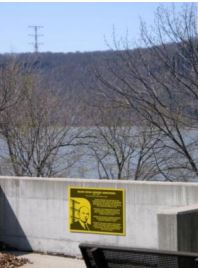 View from Yonkers to Alpine
(the plaque is simulated)

Initially, the town had another location in mind. But with the weight of an Armstrong family member in our camp the Greystone location got the nod at a special meeting on October 10th to discuss memorials to Armstrong. With that green light it was time to get serious about raising the funds to make the plan a reality.

The total cost to fabricate and mount the plaque will be approximately $4000. Some $1500 has already been pledged.

If anyone wants to contribute to the Armstrong Plaque or more information, they can contact me at armstrongplaque@verizon.net

That is where the project stands right now.

It all started with my search for a photo of a man on a motorcycle.

By the way, I am still looking for that photograph. 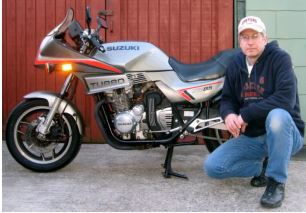